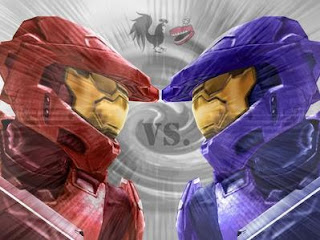 ...FYI my camera got fixed and I should get it this week so next weeks 1750 Ocean State Dice Devils Tournament should have video (and there was much rejoicing...yay)

Anyway it was a 1250 point tournament at Newport hobby in Newport, Rhode Island which is a nice little vacation town about a half hour away (everything in Rhode Island is pretty much always a half hour away). I went with our clubs leader Terra (Melonhead) who was nice enough to give me a ride. Jim from our club was also there. Games were on 4x4 foot tables (due to size and for that small of a game that table size works extremely well). All tournaments at NPH are small and on small tables due to size but it was still an awsome place. Now there were a few rule changes. Forrests were LOS blocking and you have 6" of sight through them (like in older rules sets). Terrain was fixed. There was a lot of impassible terrain as well. All missions were basicly picked out from older Editions of 40k.

Here is the Chaos List I used. It worked flawlessly and with some older rules in this FLGS Tournament it enhanced my play even more.

First game had me facing off (as if fate decided it ) against Terra himself and his Daemon army. He was running a Daemonzilla army. He had 3 Princes (one slaanesh, one khorne and one tzeentch) He also had 2! Nurgle Greater Daemons. He had a unit of 2 fiends and 5(?) screamers. He rounded it off with 3 units of 5 plaguebearers. Nice Monsterous creature spam army. The Game ws Victory points with the Bonus Objective being getting any unit inside your enemies deployment zone. He gave me first turn and I reserved everything

Turn one crickets chirped, nothing on the field till all of his Monsterous creatures came on and basicly lined up in my deployment zone. One scattered on top of a cliff that had impassible terrain sides. there were 5 or of these on the board. They would be critical. This basicly took that Greater daemon out of the game.

Turn 2 had only my defiler coming on, Defy shot and charged a greater daemon and ended up blowing up. He brought on a lot more stuff basicly lining up along my entire table edge...yay. One of his Plagebearer units did end up mishaping and letting me place it. I stuck it in dangerous terrain and on top of one of the impassible terrain sided hills. Basicly took it out of the game...super yay.
I had everything but an Oblit and my daemons come on. I focused on his Prince on the far right side of my table edge. I used my rhinos to block off his other guys so only wings could get there. My Prince assaulted and warptimed the other prince. I won.

The next turn had him shuffling about wiffing on my Rhinos. I had my zerkers and daemons gang up on another prince while my 2nd zerker squad attacked his nurgle greater daemon. I won all of the respective combats. His fiends and other princes attacked my zerkers and killed some. I got stuck in combat between his khorne prince and my Prince. Screamers and lesser daemons joined in. Combat lasted the entire game. Oblit came down in his deployment zone on top of an impassible hill.

Basicly the game went on and I wiped him out of my zone losing about 2/3s of my army. All he had left at the end of the game was his stuff stuck on hills. I won the game and won the bonus objective. It was a good tough game. I won by 250+ VP's.

2nd Game had me facing off against Horde Orks. VP with Have your HQ surviving was the bonus. I won first turn and castled in the corner. Your HQ unit had to move toward your oppoonents HQ every turn. (So I basicly moved my prince an inch every turn lol) Also there was this huge Area terrain pice in the middle taking up literally half the board. Game saw me shooting up his mobs as they moved towards me. I pinned his nob bikerz twice. He split up his army which was not the best move. I ended up taking out an ork mob and a kannon (as well as half of his bikerz). I didn't lose a single model that game. I basicly won the game 200+ to 0. It was a good game though. Kind of slow with him being a horde. So at this point I have 2 wins with all the bonuses looking for the win. The one army I didnt want to face was the one eldar guy there.

So I end up on the final table against the eldar guy. He was running footdar (to my relief, he was a 4th edition tournament guy, his army wasnt geared for 5th). He had an avatar as well as eldrad. 6 Warp spiderz, 6 pathfinders. 10 dire avengers, a wraithlord, and 6 jetbikes and 6 swooping hawks. I deployed my prince and oblits on top of this huge piece of terrain. The mission was a single objective in the middle worth the game and bonus points. I basicly zoomed across the table while my Battlecannon took pot shots at the Dire Avengers. My 2 rhinos feigned toward the Avatar/Eldrad/Wraithlord side but swing over and attacked his bikes/Pf's/WS's. My daemons came down and I basicly pummeled his units while I avoided his monsterous creatures and eldrad. Game saw my Prince jumping down on the objective and winning the game and bonus for me. I stayed away from his monsters.

So I won all 3 games and all bonus' and surprised myself by winning the tournament. I did not expect to sweep it at all. My list was awsomely balanced for this event. There are TONS of horde armies in Rhode Island. This worked to my template/assault/ null stunlock army style. This place was super fun and the tourney organiser (charlie) was really nice. He is the Minitures director for TempleCon. I ended up taking home 2 boxes of bloodletters so I can now spam those awsome units. I wouldn't change anything I did or in my list. I can not wait for next weeks tournament now. (I have a 9 game winning streak right now, so I expect to lose my next game lol)

Anyway more on tournaments next weekend!
Posted by Kevinmcd28 at 4:27 PM