Why Don't you use Legion of the Damned? 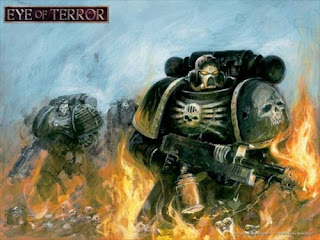 I know you just thought points cost... Well atleast most of you did.

Frankly? That is a very good reason. They are pretty pricey.

But they are so damn useful! I'm gonna tell you here why they are a key unit in my Space Marines List and also why they are almost always my MVP unit of the game when I play them. This is a continuation of my Poor Man's 40k Army List series.

Ok lets go over them. Normal stat line for a marine basicly except they have base 2 attacks. The Seargeant has ws5 and 3 attacks base. They have a 3+ invulnerable save and are fearless. They also are slow and purposeful, but then that makes them relentless. They also can take almost every weapon available in the space marine arsenal. They can also choose to reroll the scatter dice roll if they want to.

So what makes them so great? This is how I play them. I play them so they come in on the deepstrike right next to an opponents objective (out of terrain preferably because terrain is pointless to them except against daemonhunters). Then they flame/plasma the unit. Since they are relentless they can shoot the PC off the deepstrike. Deepstriking PC's are very useful. I almost always wipe out the unit in this scenerio. Plasma burns.... Anyway then they usually just move on to the objective and sit there with a plasma cannon. In killpoints I usually deepstrike them near a key enemy unit and destroy the unit. Then they turn into a roadblock for my enemy (Most players just unload thier entire army into this unit buying your other units time, generally some of the Legion survives as well).

Another thing that makes this unit great is that no one plays it, so when people see it they do not know how to deal with it. I do not know how many times I've seen people shoot battlecannons and Demolishers at this unit. This is the worst thing you could do because you just waste a pie plate. Anyway usually only 1 or 2 guys die to this pie plate and that frustrates your enemy so much (3+ invulnerable is really cool). Also this unit is pretty decent at assault so it is hard to assault them off an objective. You also have to kill the unit since it is fearless and can not be pinned or make them run away. This forces your opponent to deal with them if they are in the way or blocking an objective.

Now I would never tool this unit out to be an assault unit. Slow and purposeful defeats that. This stat line is written as such that it is decent at defensive assaults enough to hold its own. I even keep the Sarge with a bolter since I use it as a firehose unit.

Now they do come a a premium price at 30 points a model. (150 for the base unit of 5) Other downsides include no power armor aka anything that ignores invulnerable saves will jut insta-kill them if it wounds (which can suck but is pretty rare outside star gods and Daemonhunters)

The way to kill this unit is to rapid fire it to death with bolters. You can't make 3+ saves forever. Also if you drive around it and get out of range it defeats the units purpose.

Yet even with those downsides it is still a formidable unit. It is very killy with the cannon. Getting the cannon in your opponents zone is also a way to mess with his game. I have also had this unit survive an entire Tau army unloading into it. survivability mixed with defensive assault prowess, accuracy on the deepstrike and the relentless plasma cannon makes this unit the most potent objective contesting unit in the codex and a deadly one at that. Tarpitting in killpoints makes it usefull as a defensive roadblock for your shooty units. And if you need points to fill out a list using regular marines for this role is a great cheap way to get a useful unit that I've seen take out terminators.

Now go give this unit a try, prime those models black and paint some flames, you will be happy you did. Try it out, see confused/fearfull looks at your scary badass flaming models of black death. deal out that plasma cannon craziness and see your opponents face turn into horror. Let me know if you use this unit or how you use it. Im convinced this is the best way to run the Legion. Tell me if you had success in another role or as a different role.