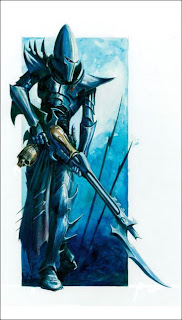 Yes please critique, but don't be too harsh, there is a reason why I have everything in the list.....


Ok first of all it is at 1850 and not 2000 to start since its my goal to have this list ready for TempleCon in early febuary, which is no easy task. so here is why I think it'll work and my breakdown of it....

Lets start at the top. I like the Baron, I think he is one of the best HQ choices in the book. For a very cheap 105 points you have a very effective combat character. He has a shadowfield so he will be hard to kill yet only 2 wounds. Decent combat ability as well. He does make Helions troops but I would not run a hellion based force, too flimsy. The way to run the Baron, in my opinion, is to only take one unit of Hellions and make it big. Small units of Hellions die too easily but a big pack of them can be very annoying for an opponent. I would like a big 20 Hellion unit as that is a very effective unit that is very hard to kill with the Baron but the points do not allow it. He also gives the hellion unit he is in the ability to reroll failed DT tests and stealth, meaning the main tactic with him and his pack is to jump around between terrain pieces losing very little to DT and getting that rare 3+ save this army lacks. Then you jump in and pick off weak enemy Indies such as priests and librarians (no trying to grab Logan which is suicide, at least not at that small of a pack). Then this unit can stay alive when it gets small and claim objectives quickly or contest since they are troops.....

Now back to the Baron. One of the heightened reasons that he is so good at such a low point level is he also gives you +1 on your roll to go first. In todays game I do not need to argue why this is important. The Hellions themselves are the biggest wildcard in this list as since I reduced them from originally 20, to 15 and now 11 (12 with the Baron) is it still effective enough of a unit. I still think with the Baron this unit will be annoying enough, which is the main point of it.....

Now my other HQ choice is a Haemonculus who originally was not part of my list (I dropped 4 Hellions, a wyche to fit him in and Raider upgrades to get him). Why do I love the Haemonculus? He is basically the Sanguinary Priest of the DE book by giving out a free pain token. You can technically take 6 of them if you fill both HQ slots with haemonculi. I think they will be the most commonly seen HQ choice throughout all DE armies. Most of them will be seen with a webway portal. I do not have one because I want full mechanization, if you lose the Haemonculus too early your Wyches are coming on your board edge and foot slogging, too much of a one trick pony.....The one problem I see with this guy is he does not have fleet so I'll need to drop the Wych unit I will have him attached to (the 9 Wyches unit fyi) close enough that they do not need fleet to get into combat or he'll have to detach from the unit leaving him vulnerable. Yet with the shattershard and a husk blade he'll be a combat beast, this as well as a liquifier gun melting some faces.....

Now I love Incubi, but they are too expensive......they may replace the Hellions eventually.....I need to test them both out....they would get a haemonculus instead of the wyches in this case.

Now I have split 50/50 between Warriors and Wyches for a reason. I feel all warriors would be ignoring what the DE are gonna be best at, which is hard hitting lightning combat. In contrast all Wyches would leave you vulnerable with a heavy lack of shooting, it came down to either this 50/50 version or a 1/3 warrior/wyches mix. The reason you see the warriors is I need units to claim objectives and have mini fire bases up close and personal. The Wyches go smack face while they get support from the warriors in thier mobile Raider firebases. Also with rams on the front of the warrior Raiders to get tank shock abilities for late game claiming. Razorflails as well as the SN/I combo so I can lock down enemy hidden powerfists/weapons and characters as well as easy wounds from the flails.

Also why would you ever want a phantasm GL on a wyches unit? when would you ever need to use defensive grenades? Do you plan on getting assaulted when you're one of the quickest assault units in the game? Even the warriors/wyches already have plasma grenades so its a pointless upgrade in my oppinion. The Warriors Sybarite gets a blast pistol and agonizer, a very typical kit for any upgraded model FYI...

Raiders will need a flickerfield and Night Shield contrary to previous comments made by me. Reasoning? Bolters........

Reducing rapid fire to 6" and normal to 18' is big, you can hangout outside these ranges very easily. Rapid fire weapons can kill raiders very easily. And who would not want a 5+ invulnerable on any model in thier army. Two very easy choices in my oppinion. The reason for the advanded aether-sails on the wyche raiders is I want them in my opponents lines turn one so they can assault turn two. The extra movement forward will be needed without a webway portal.

Finally Ravagers because they are probably one of the best anti-mech units in the list for that cheap. Typical night shield and flickerfield loadout. The ability to fire three S8 AP2 lances at 12" movement is awsome. These guys will hug he mac range as to stay out of range of most enemies because of night shield shenanigans so any other upgrades on these puppies will be a waste of points.

Finally a Cronos because the Wyches will need to be upgraded ASAP with Pain Tokens for maximum effectiveness since I only have two units of them. He basically will run up the first two turns. and then start shooting off its spirit weapons to feed my forward units of Hellions and Wyches, Wyches probably with the priority on the free tokens....

What this list lacks is a hard hitting unit....although the codex lacks this outside of expensive Incubi. I am dependent onessentially 32 assault models and 20 supportive infantry models as well as vehicles. I technically have the ability to shoot 8 seperate targets with decent S8 lances at mid to long range and 10 at close. (Wich is the main reason for the warriors as long as mech is king). This army's success will depend on quick lightning attacks on weak units and picking off tangent enemy units before going in for the kill, as well as effective S8 lances....remember technically if my warriors are up close enough I have three S8 AP2 lances since blasters ad blast pistols are mini dark lances at 18" and 6" range. The wuches can pop transports and then assault with the blast pistols as well.

This army will be fun to build and play, I got one warrior squad down already and will use them as a test squad for my paint scheme, black with blue highlights as well as gray clothe, red eyesm dark red hair, and other white details......yet please Crit the list, I've poored over the book enough and like this combo the best. I'm open to all suggestions.....more on this later


Also im gonna play a few games with my blob guard this week against my good buddy Marcus and his bugs/bots back down in NJ/PA...So look for video BatReps with my revitalized 1750 Blob Guard list soon on the youtube channel (which I do post on and not here sometimes soon) , it'll be fun to play that army again.... youtube.com/kevinmcd28

@AbusePuppy- You make good points. I basicly intend on keeping the warriors up close but atleast 18-24 inches away and bring them up for assault support only to help push wyches forward, but if that happens I am doing something wrong. About the hellions I want to keep the stunclaw and grenades which is a problem I see with the unit. Yeah the Ancient is way better for the 30 points. The Cronos is prbably gonna be replaced by another Haem for the other wyche unit more than likely. Thank you
Posted by Kevinmcd28 at 7:28 PM