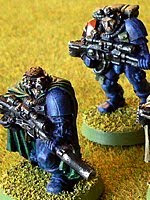 So today I’d like to talk about a different style of 40k we aren’t use to in today’s mech. An element always underestimated and that is the static element. Another good fit seen in the codex that is also under used is the combination of Bolster defenses and camo cloaked scouts spammed out. This army may not be the most effective yet it will do for you what you need it to do and could possibly be good against DE. So here is the list…
Total -1996/2000
HQ
· Lysander
Troops
· 2x 10 scouts with snipers and camo cloaks
· 2x 5 scouts with snipers and camo cloaks
Elites
· Terminators x10 with x2 cyclone launchers and a chainfist
· 2x Dreads with TL Lascannon, HF and DCCA –
Heavy Support
· Thunderfire Cannon
· 2x devastator squads + 3 marines with x2 Lascannons and x2 ML’s
For one thing thunderfire cannons are very under used in the USA despite their European popularity. You also get a techmarine with bolster defenses. Also You might notice Lysander and 10 normal termies. I like this combo because it gives bolter drill an actual use (I don’t have him for that reason which would just be plain silly) but they make a good counter assault element against armies rushing you which should happen. Lysander also gives you bolster defenses again. This gives you two pieces of terrain with +1 to cover. This combined with camo cloaks gives the scouts 2+ cover saves. 2+ save scouts with snipers spammed out is kind of scary if you have never faced it. Also the devastators and TFC get a 3+ save. You combat squad the termies to make use of their krak missiles. And use the dreads as fire support until the enemy gets close then rush them up as a flamer/combat support buffer. In total you have 41 models with 2+ saves, 7 anti-mech capable shooting units. 11 terminators and a lot of fire support. Also the scouts can pin enemies.
So basicly what you do is you fortify two pieces of terrain with open fields of fire in front of them with a devastator squad and 10 man scout team in each. Lysander with the termies are between the two pieces of terrain. Dreads are guarding the flanks. The thunderfire takes up a position in the safest of the two terrain pieces. You take the two 5 man scout squads and either spread them out where they won’t attract attention but can annoy your enemy such as from tall buildings and such. If you have a 3rd objective they can sit on that as well. All this as well as camp them on your two castled pieces of terrain. With the amount of anti-mech armies out there this army will take them by surprise. Lascannon spam will just be silly against this army. Expect a lot of weird looks running this but your opponent will understand why after you beat his face in…..

….more on this later ....
(FYI from now on I awsner comments in the article)
@AbusePuppy
Well yes Lysander being open to being shot up is a valid point, I was toying with the idea of a lisdt like this a couple weeks ago with some people in my club. So yeah I was looking for comments or improvements yet I still dont run any of the lists I post up here unless I specifically say I do....to much time on DE now lol. ummm yeah some valid points made sry to flip out it was the cute comment. =]
Posted by Kevinmcd28 at 2:33 PM