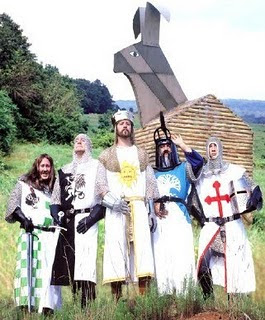 Hey all Kevin here sitting in New York Penn Station and hating every minute of it, but hey I am a Rangers fan...Anyway that's pretty off topic today I am gonna talk about why Black Templar players currently do not want a codex update and how they can still win after the recent win of Nick "Darkwynn" Rose at the Feast of Blades.

Almost a year ago we saw the big FAQ shakeup greatly increasing the viability of both the Dark Angels and Black Templar books. Now we were all greatly mystified at the new shiny Deathwing viabilty and saw the Dark Angels come back on to the tournament scene with the now ever so typical Deathwing build of 5 or so thundernator squads equipped with a cyclone missile launcher, a chainfist or two with some fast melta in either speeder or attack bike form. This for the most part distracted the online community as we saw these lists do fairly well for a small period of time, one of these lists with in the first week of the FAQ won the Templecon Singles tournament with ease and skill. We all did kind of ignore a new power house back of the line book still abusing some of the cool things from 4th edition with new updated wargear options. We can see this with some awesome Black Templar builds.

Now the newer Blood Angels book is a good signal for what will happen with the Black Templar book when it comes out. An ability to still take heavy deathstars with a lack of the cool old abilities and a few new units. Lets go over what you get with Black Templar compared to a vanilla marines equivalent.

For 95 points you get 5 crusaders with a lascannon. To even get a lascannon in a marine aquad you need to buy 10 marines first and then a expensive lascannon running you up to 215 points....and your vanilla marines dont have preffered enemy and access to a razorback that can take power of the machine spirit and extra armor effectively making it a fast unstunable/shakeable vehicle.....although for a hefty price of 120 points.

speaking of which this codex actually makes vindicators really scary with a combination of power of the machine spirit and extra armor letting them move 12 inches and still fire while ignoring shaken and stunned results for all realistic purposes. You also have the ability to get a LRC with blessed hull...the ability to stop the things that easily penetrate AV14 can be huge....

Did I mention you can have a squad of terminators with a couple cyclone missile launchers and tank hunters effectively getting a terminator squads with four S9 shots a turn....

4x 5 crusaders with lascannon, one with a TL LAS POTMS/EA razorback

This list leverages a lot of S9 shooting and some pretty good death star punch. The one thing this book still has is cheap troops but expensive assault options....It is an issue as much as a blessing.

Still with some of the old abilities still lingering around this book can play fairly competitive against the current meta....It will have trouble with Death Cultists although....In my opinion it still has enough where it counts beat a lot of the msu transport spam of today....more on this later....
Posted by Kevinmcd28 at 10:02 AM