Hey all, Kevin here with a folllow up on a very contreversial post I had thrown up here as part of my "Middle Ground Moderator of Reasoning" series (FYI I keep that as a folder and is not an actual series up here). When I write these articles I try to take an unbiased look at some of the issues in the hobby today and try to show a pragmatic look from the facts and reality. Now Nick from Chapterhouse Studios chimed in with this comment...

"It is amazing how little thought and research went into this post..

Chapterhouse Studios has never made a wolf or thunder wolf type model among other critical points.. "
-"Nick of Chapterhouse"

Now I wrote the article, as is most of my articles, based on word of mouth and second hand accounts. I should have stated that GW was afraid to release a thunderwolf model based on the fact so many other companies and sculptors made 3rd party models for conversions. REALLY what model I should have used as an example was the Tervigon conversion kit from which the lawsuit was based seen here from the Chapterhouse website...http://chapterhousestudios.com/index.php?route=product/category&path=81_84 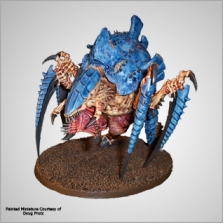 Now since I like to be a man of facts, and since I was challenged by the owner of the company I was using as a clear and blatantly obvious example of the point I was trying to get across, which was that 3rd party companies were making conversion models as well as stand in counts as models and then selling them online with the exact title as in the codex putting GW in legal harm and causing official models to be delayed or canceled all together, and was told that I "put little thought into" the previous article I would like to point out the facts I should have placed in the previous article. I read over the court documents between GW and Chapterhouse, here is the link to the document of the GW lawsuit against Chapterhouse itself, as well as looked over the Chapterhouse site to see what possibly could cause GW to sue them over IP infringement....here is what I have found. (A lot of paraphrasing fyi)

In the lawsuit document it stated that Chapterhouse was blatently infringing IP on thier website with too many examples to count. They stated that the parts were made directly for Warhammer 40,000 and Fantasy itself and we can see this for ourselves. Immediatly on their site you can see conversion parts for Eldar, Space Marines, Imperial Guard, etc.... If you even look through the website you can see their parts on a Predator itself. Chapterhouse sells kits specifically stated for 40k units with the actual names of the codex enteries all over its site which was the basis of useing them as the example for my article. The lawsuit also stated that some of the parts were not very good quality as well as they easily break. Now I have no experience with Chapterhouse pieces and am only stating what the court document as well as many other second hand oppinions of the products.


Now the point of the last article was to point out how 3rd party sculptors and model producers were underhanding GW, as well as the fans of 40k and fantasy, by releasing models with names of specific units in codices released by GW putting GW in a legal bind over the release of an official model for the game when these companies can make these models with alternative names which GW itself has shown little care for over their offical games day conversion rules. A great example of a company that does this legally in a way all of the other 3rd party model producers should do is puppetswar with all of their conversion peices. This is a simple and easy solution that does not directly create IP issues that these companies can cause and by doing so HURT THE HOBBY. This is a very simple point I pointed out. Personally I actually like Chapterhouse Studios conversion kits (That tervigon peice looks fairly sick as well as their imperial jetbike). They make some pretty cool sculpts themselves. In my last article I use their non-exsistent thunderwolf model as an example in my arguement in which I was wrong and I do apoligiz. Yet we can honestly come to the conclusion that we do not have a Tyranid wave including atleast the tervigon, but also possibly the ymgarl as well as other unpresent models do to the actions of Chapterhouse Studios which in turn hurts the hobby...which is the point of the last article and the thought of many other bloggers and wargamers with countless blog and forum posts across the internet...which is all I am trying to say.. I hope no more on this later but 'tis possible.....

In other news I try to normally not respond to comments as I take my writings not that seriously {and I take a lot of abuse from abuse puppy which btw i love your comments they make me laugh at myself sometimes, your a good critic mate thanks :) } ...but please people, play nice :)
Posted by Kevinmcd28 at 10:33 PM