The Conflict GT in Review 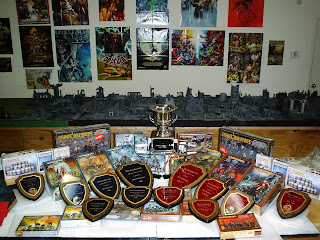 Hey all Kevin reporting in about The Conflict GT after a few days of mulling over the events. In this article i will post about the event in general, who won, the list breakdown, the meta game, and my personal experiences/games. First lets start off with the list breakdown of the event.......and man has the meta changed in the major tournament scene in the past year....

Lets just say razorspam is a long gone thing of the past. Outside of the GK armies, the last razorspam, and Dark Eldar Venom spam mech is cut in half. I think with my two razorbacks I had more than almost all of the marine armies there. If there was mech, and there were a couple identical builds like this, it consisted of tri-predators with a couple dreadnoughts and mabye a razorback or two.....or rhinos. Also besides mine there were a few multi-land raider lists. Regardless it seems that GK really forced the game to switch to a high AV list with about half as much mech than the past. So these heavy/smaller mechanized forces are whats in. I also ran into quite a few heavy foot lists on the marine side....so the breakdown of Codices came as such and the breakdown of the top tables that everyone would want to read....

So the top table in the final round was Alex Fennell, who was top table the entire event with his pink flower and butterfly necrons knocking out Rich Thorkorn's Sisters army round 5, and then in round 6 a very good daemons player Bill Souza. They ended up getting a very common tie in the event leaving it open for Andrew Gonyo, the returning best overall, and his Grey Knights to take the event. His list looked something like this (I didn't get a look at his list just what models he had and a small discussion with him after the event so I may be wrong)

Alex Fennels 2nd Place Necron List (EDITORS NOTE: He held in there neck in neck until Andrew took the lead after 5 and cemented it with Alex getting a tie round 6 and Andrew winning)

Sprinkle in a sl or two more on the basic troop razors to make 1750, i cant remember if one or two had it.

The top 10 players and codices were as follows....

Overall a very good list. He came back into it from behind since he was on the lower tables after an early first day draw. This kept him off of Alex Fenell who was (cold steel) Mercing people all day with a very odd Necrons list including everyones new favorate dirty necron deathstar which is The Traveler in a command barge getting his sweep attacks, taking over a vehicle and mercing another vehicle, then jumping about destroying another vehicle in assault....and the command barge shooting up another vehicles rear armor.....a real pain the @$$. Anyway it also included some scarabs, a few spyders, a monolith, some warrior squads and wraiths. He ended up taking down another necrons list, a daemon player, a grey knights player from my knowledge (I played next to him in almost all of my rounds).

So overall the event was a 1750 point tournament with no restrictions. Since the tournament was a single mission win/tie/draw with no tiered winning levels this tournament was full of draws. I personally tied half of my games! The scenerios themselves came off a little funky with scattering terrain and low objective missions. There was only one killpoint game as well as a retro 3rd edition recon mission and table quarters (which was kind of wierd that any unit could contest any corner making it an easy tie game). In general I do not know anyone at the event who did not tie atleast one game. There were no big issues and no real rules disputes and there was a lack of scarab farming other than fritz who chose not to use the cheesey way to enterprite the rules anyway.

So as for myself I brought a list I changed about a month before the event and only got two practice games in with (Every gamers number one mistake). It consisted of 2 land raiders with unupgraded 5 man tac squads. 2 razorbacks(one las/plas and one tl las) with unupgraded 5 man tac squads. a tl las/ dccw/hf dread. a mm attack bike....and my biker command squad.....I thought that with my two recent tournament 2nd place finishes with my duel land raider chaos lists I could change my marines to go with this theme. Now I had an feeling this list would'nt work before hand and after the 3rd round I had confirmed my thoughts. See with my defensive back line scoring land raiders and my razorbacks I had a lot of lascannons but with the lack of mech in this meta I had nothing to deal with anything else but my biker command squad. I went 1-2-3 overall in the event knocking myself out after 2 draws in rounds 1 and 2. I ended up 31st out of 42 overall in another dismall personal performance at a GT....sigh always next time....I really have to start bringing not crap lists to these events.

I played a tau army (draw) a cocheese gk list (draw) a very young but apperently extremely good necron wraith based list (loss) a daemon player (loss) a tri land raider and storm raven blood angel list( draw) and a adeptus mechanicus themed vulkan vanilla marines list (massacre win).......Terraina t the event was fairly meh with little to no los blocking terrain and we could place it (so I always put the los blocking stuff on the table edge making it an open battlefield for my lascaanons). Still it was a nice event with some cool games. Look later for a video of the event......more on this later....
Posted by Kevinmcd28 at 2:14 PM