1850 Game On Tournament Report: How to do Well with Vanilla Marines 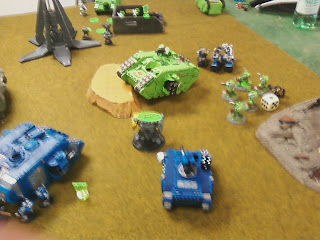 Game 3 vs. Sons Of Medusa (vanilla marines)
Hey all, found out friday while on facebook that my flgs had moved its usual 40k tournaments to the third week of each month....which happened to be yesterday. Luckily I brought my Storm Wardens back up with me to Rhode Island and I decided to use the same list I used in one game ever back against my friend Marcus in early January. I have had no time since to play 40k for the most part since the Conflict so this was welcome. It was an 18 player tournament with some big hitters including our local champion Simon Leen with his now trademark DOA Blood Angels list using sisters models (A very cool converted and WYSIWIG Army) Also Bill (Sousa? sorry I forget last names easily) a very good player and nice guy from Dark Star and as usual a couple Cold Steel Mercs. Also there were some new locals and Bostonians making the 45 minute trip in attendance. This is one thing I like about this store, it has a good ammount of highly skilled GT players always in attendance. So here is the basics behind the list i took
It was a fun list I wrote in response to the major issues I found with my Conflict GT list which was I had a lot of things to kill vehicles but nothing to get rid of the squishy contents at all.....So I added a bunch of plasma cannons with great success....The sternguard came from all the bits I have from a megaforce box I did not use yet.....they have been extremely useful so they replaced one of the land raiders.....this is fairly good since if I run into any land raider based death stars my pod comes down turn one and blasts the land raider to bits, my three plasma cannons blast the waiting death star to bits...as well as that super silly fun deathwind launcher which is 20 points of epic win....and anything left gets stomped by my bike squad.....this tactic tends to work fairly well with a decent amount of synergy in the army.

Anyway that was my list. First game came up against vanilla marines which consisted of a large 10 man sternguard squad with a librarian. Then a land raider with 5 terminators and another land raider. Then about 4x 10 man tactical squads with lascannons.  The game was killpoints and table quarters...This guys whole plan was to drop in the sternguard with librarian and then use a teleport homer to let the termy unit use gate of infinity to get close.....A legal tactic that with 2 large terminator squads would be scary....but not in this case. I kept my bike squad in reserve to destroy his backfield he lef unprotected and kept my land raider in reserve for it to be protected from his sternguard.....I deployed my two razorbacks next to each other with my two dreads between them and my 10 man squad, which I normally combat squad to make the land raider scoring when its not killpoints, in front of them behind a barricade. He goes first and pods in and blows up one of my razorbacks... and gates forward his termies....he fell into my trap. turn one has all of my stuff come in so my bikers turbo boost right next to his fun squishy tactical squads while my pod drops right next to his termies.....which then lazer beam and kill all his terminators. My starting formation breaks apart so my 3 plasma cannons can center all on his sternguards and kill all of them. This is where this guy starts to be a complete ass for no reason. He trys to say that he would get cover for no reason and try to rules lawyer a bunch of crap...he quick rolls behind buildings without declaring and fudgeing dice rolls then says I amdoing the same thing which I was not. He basically starts getting pissy for no reason. The old me would have yelled at the guy to just shut up and lose yet I kept my cool and tried to be nice to this guy. I got almost max points....ugh this guy is why I am stopping to like competitive play, people get so uneccessarilly angry and bitchy when their cool little plan does not work at all.

Round Duece has me playing on table 3 with my clubmate Simon on table one against a Cold Steel Mercs IG player whose name I cannot remember. My game was against a very skilled duel death star BA list which had two storm ravens, one with death company, and a DC furioso with blood talons, and one with your typical terminators with reclusiarch and priest. He also had a baal pred and a rb assault squad with corbulo. All rounded out with a jump pack assault squad. Our game was a 2011 adepticon mission where you only needed to get half your enemys kill points to win with a standard 3 objective secondary mission...tertiary I forget.... He won first and I knew I had to make a game changing decision. I knew my raider was the biggest threat to his storm ravens. So I have my entire army castle on the opposite corner of the table as his storm ravens near an objective with my Raider all alone in the opposite corner....I hoped to seize the initiative but I had two plans....Plan one was to hopefully seize the innitiative and blow the ravens turn one and prevent his death stars reaching my army....Plan B was a ruse...use the land raider as bait hoping his storm ravens would jump over to melta it so my lascannons on the opposite corner, as well as my sternguard....could blast them to bits isolating his death stars for my plasma cannons. I didnt seize and he took the bait! I pop both ravens and destroy his death company....my bikers sacrifice themselves to hold the termies just long enough to take them out of the game. I grab two objectives and play killpoint denial while racking up kp's myself takeing another victory based on deployment......deployment is key in tournaments and in games in general but that is its own article. This was a great, exciting game with a very nice opponent (unlike game one) Simon got almost max points again putting us both up near the top. Game 3 saw simon on table one vs. Grey Knights while I was on table 3 again against another vanilla marine army.

My opponent, an ex-GW battle bunker employee, was rocking a LRC with 7 terminators, a chaplain, and a librarian. 2x10 man squads with assorted weapons in rhinos, a razorback with a 5 man squad, 2 devastator squads, one of which had all ml's and one with all lascannons. I rolled first and deployed balanced fairly tightly in the middle hopeing he would spread out and I could focus on one flank. We had a large LOS blocking piece in the middle to help this. Mission was another KP mission with 5 objectives as secondary as well as marking an enemy unit for death as tertiary. He deploys almost all his units on one flank except for a devastator unit in the opposite corner. I was happy enough to take that one dev unit out of the game by completely switching fields. I try to pod in my sternguard to take out the raider but it scatters out of range so i justtake out a rhino full of guys. I also blow up his other rhino with shooting as well as take off the ass cannon from his LRC. Now to be fair this guy rolled probably the 2nd worse I have ever seen in my life. He didn't even kill one of my models till turn 3. He assault my sternguard, which that combat lasted 3 full turns before I finally kill off his entire unit, and steam forward his LRC toward my 10 man plasma cannon squad. In the end I couldn't kill that LRC or the termies for my life as that unit runs through half my army alone. The game came down to turn 6 as we tie killpoints yet I was the only one holding an objective. So I get a sort of winning draw as we tied primary and tertiary yet I won a lot of bonus points and secondary. This gives me enough points to take 3rd place by 2 points! Simon got first with an easy massacre so our club took two podium spots.


All in all it was the second tournament at Game on in a row I got a podium spot at with my 3rd RTT in a row with a placing....a nice turn around from last year. This was suppose to be my fun list yet it surprisingly works extremely well with a lot of synergy. With my 4 games with it I have won almost all of them and fairly sound in fashion. Next month is 2000 points so I am planning on making the Venerable dread a normal one while adding in a tri-lascannon devastator unit as I need more anti-tank in my oppinion...especially at 2000 points. So how do you play the fairly old Vanilla marines codex well? Well first of all it still is the dark horse codex as it has more GT podium placings than any other codex this edition with a fair number of elite players using it well. In my humbled oppinion it is more of using its few advantages left...such as the special characters section including some good option such as Shrike and vulkan.....also the biker command squad being a unique component as well. Still it is power armor and that is forgiving enough with enough time for us players to get use to its ins and outs for almost all of 5th.... Next up is the Colonial Fantasy GT in two weeks. I have still yet to play a fantasy game yet.......or finish painting my army.....this is going to be a train wreck....more on that later...
Posted by Kevinmcd28 at 1:10 PM