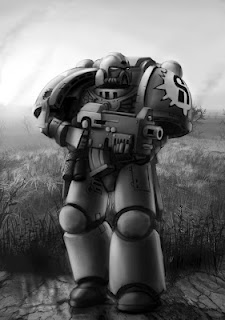 You know when I keep going on and on about different space marines lists I always forget exactly what I used back with my old Imperial fist marine army that won me my first tournament, and it was my first tournament haha.....Its always funny when you start an army to be more competitive even though you already have another older army for that book, and you pretty much end up with a similar list in the end....small world...anyway I always did good with a similar list to this....if you read my stuff back then I called it my "Poor Man's Marine Army"

I won many a game with a list similar to this...Lots of melta...and even though it would be for fun games to finish 5th up it could do fine in a local tournament....I did win a 1500 point tournament with a list very similar to this one back in my tournament noob days just without the sternguard and normal terminators instead of assault ones....you didnt really need the assault ones since the avenger and a normal heavy flamer would usually nuke a unit before you would assault it....one of the few applications in the dex where regular termies are good...but for this one I would go the 7 assault terminator route.....so its still decent. Some vehicles but not too dependant on them. Simple idea, land raider with termies and libbie charge forward with bikes. Pod drops in and nukes something. combat squad out the heavy weapons and they camp objectives, RB's take mid ground objectives...last minute contestion or just to preserve KP's you can always jump away with the libbie and termies and turbo boost back the bike units....try it out its a lot of fun.
Posted by Kevinmcd28 at 8:14 AM