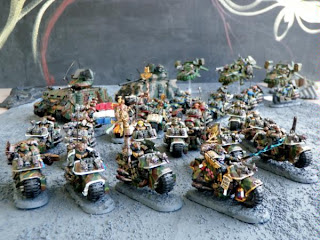 image via DakkaDakka
Hey all, Kevin here to talk about bike lists in 6th edition. So really are they any better?

In the short version, yes they are. So before we go into specific units or models lets talk pros and cons of bikes in this edition compared to the previous....

Cons
Pros
So realistically bikes did get a lot harder to kill. add in possible wound allocation shenanigans from Nob bikerz or a captain in a biker command squad and these guys got a lot better. Changes to allow modified toughness to be used in cases for instant death instead of base toughness also increases survivability of multi wound bikers as well as for bikers with Feel No Pain. Boosted charge range and not taking dangerous checks in most cases makes the threat range of these guys a lot larger potentially.

So lets go into some units...starting with my personal favorite unit.

While I will admit I am just about to start using this unit again this weekend I feel the changes to the rules really benefit these guys. First of all my Captain on a bike can take a 2+ armor save with artificer armor. So that+FNP means I can stick him out in the front of the unit to absorb as many wounds as possible with his 2+ save until he takes a wound or two then I can start to use LoS! to bounce wounds back to the storm shield veterans on bikes. Also if I take a missile launcher wound on the captain he can't be instant gibbed if I do roll that one. Also with T5 they now get FNP against almost everything. This assault based unit benefits from the increased possible charge range as well as fleet finally if I happen to have Shrike in the list. Also since they are an offensive unit line breaking is not hard for these guys, especially since the captain is an independent character in the unit so he can break off to grab LB.

Now is the resurgence of these puppies as kings of the Ork list. Personally I am happy that they did get a boost. Since they are all considered characters with multiple wounds they can LoS! wound allocate very efficiently. Being T6 they could always get FNP no matter what with the painboy in the unit. These two facts alone make them fairly difficult to kill and in an edition where wound allocation works the way it does durable assault units with that much speed will have a place in the game.

Big winners of this edition. Now since bikes can shoot as many weapons as a bike has riders you can shoot your heavy weapon as well as the twin linked bolters. I also like the fact that since they can throw grenades which means when I ride up with my multi meltas and throw a krak grenade as well shoot my multi melta, then assault with more krak grenades which ends up with more HP damage. Although the question does arise that since they can use as many weapons as models are on the bike does this let these guys get two krak grenade attacks or just one? I always play the former to be fair but it still ends up in a lot of damage. Also Attack bikes no longer can be instantly killed by a simple krak missile. So you can take a missile before you die which is nice and makes these guys a lot more viable.

These guys got a lot faster. Eldar jetbikes now get 2D6 assault moves so a possible much farther move lets these guys do move shoot jump over larger distances. also  12"+24 inch turbo gives these guys huge speed. Also, according to the rulebook, they can jump on top of impassible terrain which is fairly cool. Great late game objective grabbers as well as a sure win for line breaking every game.

So bikes got a lot better in general and all bike lists seem a lot more competitive in this edition. I expect to see tons of Nob bikerz lists as well as the occasional white Scars list.....so go grab your bikes out of their dusty boxes and get them on the table. I know I am

Thanks for reading folks! Please subscribe to my blog by clicking the button on the right side of the page and leave a comment below. Also listen to this weeks 11th Company Episode 130 as I got a chance to be a guest on the show as a guest host! Thanks for reading
Posted by Kevinmcd28 at 11:23 PM