How to play Codex: Space Marines Competitively in 6th Edition 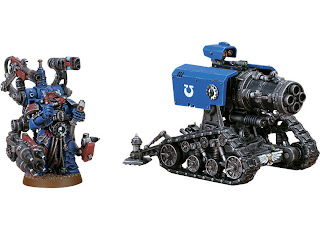 Hey all, Kevin here with some thoughts on what has been my main codex of choice for many years now, the Vanilla Marines Codex. So Why Codex: Space Marines?

At this point many would argue basic tactical marines are overc osted and almost everything in this book is in every other book for a price reduction and more cool abilities....but that just is not true as Codex Marines has some of the best abilities and units inside of its pages for 6th edition game play. This article will go through the benefits of using the Main Marine codex and then go through a list using the best options available to a Vanilla Marine player. The following are cornerstones to a currently competitive Codex: Marines Player's army.

OK so first of all the vanilla codex has a combination of special rules that make it's units some of the best currently, and that is "Chapter Tactics"(CT) and "And they shall know no fear"(ATSKNF)

Everyone knows ATSKNF allows Marines to not get swept in combat and auto rally if they do decide to "Tactically retreat" (not run away). Yet most seem to skip over the general CT that allows marines to auto fail any morale check they feel like when presented with the option to roll. This is a seldom considered rule when an opponent playing against Codex: Marines decides to shoot at an opponent. How is this useful? Well I use it to avoid assaults all the time currently and then jump forward, shoot my opponent and assault him. Works quite well. Now of course this can only be done if you do not take a special character who would replace CT with their own version....and some of these abilities, like Vulkan Twin linking flamers/meltas are all too popular and effective.

As for effective units nothing can be better than Pod-born sternguard these days. With their special issue ammunition ignoring everything to cover and 3+ saves or even 2+ poisoned shooting or 15" rapid firing these guys are good. With 2 attacks base they are not a push over in assault after some 2+ poisoned overwatching. In an edition which focuses more on foot than vehicle plasma sternguard take a top position in the codex.....but how do we compliment them? A proper leader...

Now when considering units unique to Codex: Marines the HQ slot is the most memorable. Whether Vulkan, Lysander, Kantor, Khan, Shrike or Tiberius is used these characters shape how the army plays. Now two of these characters seem the most useful with the current play style of Codex:Marines....Lysander and Pedro Kantor. Pedro allows Sternguard to be scoring in a very objective heavy main rulebook while Lysander allows bolters to reroll shooting. They both replace CT with stubborn....not a bad USR when it comes to holding objectives but still not as good as normal CT. Yet both are good choices. I lean Lysander for the re rolls and the fact he is about as effective as a squad of terminators by himself.....but what about non-special characters? Well without divination access Libbie's are OK but not as good as they can be. Chaplains do not provide dakka based lists with any bonus' and normal captains are never used.....well except by myself with my biker command squad, a unit unique to Codex : Marines. A biker command squad fully equipped with storm shields and power weapons, claws, hammers, or fists.....even with melta guns too is a very hardy unit. T5 3++ FNP with lightning claws and a meltagun is a very legal model...the bike allows some extreme speed and they are efficient in combat. Now it is a niche unit that got a ton better in 6th and my personal one is my baby yet it is a points gamble.....one I love to take but for your average Joe I would stick with Lysander....

A cheap unit that got a huge boost in 6th was the multi melta attack bike. for 50 points we have a 2 wound model with a multi melta......and why is it better than a speeder? Well it can deny objectives and even score in the scouring but unlike a speeder a single missile launcher shot cannot kill it. With T5 it cannot be doubled out but with S10 weapons....it has two wounds. Also since it has two riders by the new rules you can toss a krak grenade and fire the multi melta......then assault with the krak grenades.....mine actually kill more models with the krak than the melta ironically.....I would also like to give a shout out to the storm talon. It made its way into my list as my only anti-flyer choice but I have noticed something. Every opponent is divided into three categories when it comes to flyer's. You either have flyer's, have some dinky fortification with a quad gun or lascannon, or you have nothing to deal with them. I find that half of my opponents tend to find themselves in the third category. The twin linked under slung (so it can rotate all around) assault cannon with the 3 shot autocannon called the skyhammer it is not all that bad. Without anti-flyer defense this guy tends to go unmolested for the entire game firing 7 shots a turn generally killing light armor or small groups that are scoring....is it efficient or the best? No but it is something that can kill another flyer that we have access to....

The last cornerstone to the army is another Codex:Marines exclusive...the thunderfire cannon. A work of art in this edition. 4 shots at either S6 ap5 or S5 ap6 ignoring cover this thing is just great. it can kill infantry or even strip hull points off of stacked vehicles. With T7 and two wounds it is just plain hard to shift way int he back field....also remember since we have a techmarine with these guys we can bolster a ruin....so 3+ cover is available to hide some marines on on objective behind. Simply an anti-horde wonder gun for a oddly cheap 100 points....

So what about troops? Well between scouts and Marines I would have to state marines. Scouts have sniper rifles and with the new rules they are OK but since the majority of cover (unless you are behind a fortification, a hill, or a ruin) is 5+ so even with cloaks that is a 4+ and you are only BS3 and WS 3.....quite disappointing....now a full tactical marine squad, although expensive, is effective with cheap plasma cannon access as well as plasma guns. A couple units of these guys with the plasma cannon combat squadded in a bolstered ruin on an objective is a hard thing to push for your opponent....also what about a transport? Now many say the day of razorbacks are gone but I have noticed something. If they are the main point in your army yes they are paperbacks now...but with little or no upgrades and just 2 or 3 to hide a plasma gun and a squad in behind a building or even just supporting with its heavy bolter these guys tend to be ignored....with other bigger threats these guys get ignored all game until some high speed gets your guys where they are needed....so a couple are fine for some maneuverability but overall don't put more than 2 or 3 eggs into their basket....

so now comes psychic defense....face it our psychers are meh......allies lets us get around this....now I know you are saying "this is Codex Marines Tactica why talk about allies?"....well because they are a choice we can take. We are battle brothers with wolves....they allow access to divination, the current top power set allowing re rolls, and a 4+ roll to stop any power, even buff powers, your opponent casts...true psychic defense....and grey hunters in a pod compliment our pod guard well....so what does a sample list look like? Here is a good competitive all comers list.

So what this list does is either drop 3 pods turn one with lysander, both sternguard units and the grey hunters for some serious turn one punch or drop 2 empty pods and the GH defensively. Rune priest hangs back in your castle/s casting powers like prescience, while tactical squads fire off plasma cannons and the thunderfire cannons in a small blast spam...all sitting nice in bolstered ruins sitting, hopefully, on objectives. Storm talon harasses or takes on enemy fighters while the MM attack bikes go tank hunting in your opponents back field and then grabs line breakers late game. An efficient and well thought list concept that works in 6th edition....

Now in review we have 4 main cornerstone units. Pod-born Sternguard, MM attack bikes, Thunderfire cannons, and Plasma tactical squads camping objectives....everything else is personal taste. With these units Codex: Marines can be a tough book. I hope all of my play testing and experience on this subject help. Well more on this later....
Posted by Kevinmcd28 at 11:18 PM