What is Perfect Tournament Terrain?

Hey all. So I am always looking at how to make a great tournament format for kicks. Recently I have been thinking about what makes a great table for tournament 40k. Now a lot of players hype about Nova terrain, which is good.I took a bit of influence from a speed ball paintball field where the sides have an equal balance yet there is a strategy to play one side or the other for your army/team. So this is my own spin on what would be a good table basically using the following template. 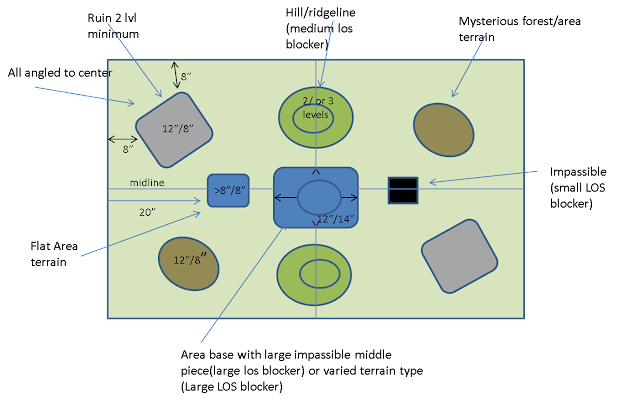 So let me explain it. Each long table edge has a ruin in one corner and an area base, probably trees, in the other with a medium sized at least 2 level hill in the middle. We will use normal hill rules as they actually have some flavor to them since you get a cover save from being up more levels than other hills and a good 4+ save if obscured. I would suggest having moving up and down the sides count as difficult terrain to allow some impairment. The ruins have a decent size base as well. Now we don't necessarily need to use a mysterious woods like the diagram but I believe they should be used. it is isolated to just 2 pieces and they add flavor/strategy to the field. Realistically there is a power to effect them in divination which also makes me want to use them. Another thing you could do is roll at the start of them game on a 4+ they are mysterious.... the middle piece should have a large los blocker on an area base. This is almost standard these days. If you notice between the ruins, hills, and middle piece we have a nice amount of firring lane breakage to promote tight games. Also no terrain is more than 8" or more closer to a table edge in order to allow some placement of units in terrain without allowing a complete castling up effect. Now where the field really gets its flavor is from our essential snake and Doritos sides effect (speed ball field reference) sort of from the two small middle pieces. one is a low lying area piece to allow some forward cover hill the other is a small los blocker to help move pieces forward. This promotes some deployment strategy as it matters which table edge you pick and which side you lean your deployment to determine the main terrain that will be in play all game. This promotes deployment strategy instead of just a plain mirrored deployment. It also add stradegy by making every single diagonal/short table edge deployment types you can choose. For instance if you want a ruin for the diagonal deployment you have to choose if you win whether the small area or the small los blocker is more helpful to you or your opponent. Or you could choose to force only an area piece in your opponents by choosing an diagonal with an area piece in it. Same with hammer and anvil as since the smaller middle pieces are slightly inside each deployment zone you can decide whether area or a piece to hide behind in deployment is More advantageous.

The point is that this is still a balanced tournament formatted table yet instead of the standard mirrored tables this table would bring a bit more strategy to which deployment zone you choose or which side you lean your deployment towards. Effectively you get to choose the ground which you want the main engagement to be decided on....I hope to talk to Tactical terrain Eric for a Segmentum this week on this subject. So any thoughts?
Posted by Kevinmcd28 at 12:21 PM