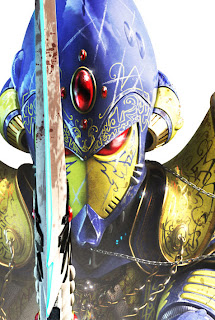 So a month and a half later (Which is apparently 7-10 business days) I got my laptop back, unfortunately its still crashing every 20 minutes and they didn't even fix it.  So while I have it I think I would like to chime in on Eldar in a competitive sense as I prepare for Feast.

So three games in, 2 of which I am experimenting with an allied choice I will most likely be using at Feast, and no, it is not Guard, I am liking the codex as a whole and I have tabled my opponent all three games which normally does not happen for myself...at least three times in a row. It is much better than I, or most of the web, originally thought.

The obvious things make this codex strong, yet using an unconventional approach in the sense of older Eldar which heavily relied on Psychic powers. Yes they are useful but I do not see an over reaching need for them at this point, they are just nice and useful. I still would take a MOTLG Jetseer as my standard HQ choice although I still like the biker Solitaire combo as well but thats expensive for a super melta bike with one glaring weakness if he runs into something that ignores cover...aka other eldar. Now I do still go for guide/prescience and going for doom or fortune on top of it. Although since I would plan on using wave serpents with Scatter Lasers or Bright lances for their laser lock rule twin linking the shield and probable cannon. So re-rolls are not needed really if these guys are spammed out.

So the obvious troop choice is 5 Dire Avengers or 10 Guardians/platform in a Serpent with scatter laser (Or bright lance if you need it) with the shuriken cannon upgrade and holo-fields. There is something about a possible average of 10 1/2 shots most likely all twin linked and S6/7 with all the other weapon perks that seems hard to ignore. Also with the large capacity and 4+ cover/possible serpent shield downgrade when needed to stay alive longer instead of shooting....oh and 12/12/10 is awesome...

These are all obvious things that I need not to point out. The reason I like these, as well as a couple obligatory jet bike squads, is that we have a solid scoring option that can stay out of range, pick things off, skirt corners, and then jump on any objective late game. Necrons win since Night Scythes can skirt around picking things off mostly unscathed and jump on objectives late. Players tend to make a huge deal on how it is to kill a flyer and how they win games when it is really the puny unit inside that wins games with its ability to jump on objectives late.....we have this key piece to the puzzle that has proven to win games. You can weight advantages and disadvantages of both sides as well as cost appropriate to mission and environment...and personal flavor.

We also should note another key list ability. Which is the ability to deal with high toughness and high armor opponents. We have this in monofilament and bladestorm abilities. With these abilities so common Ive been finding out we really have no need for starcannons or already base AP2 weapons. All we need is weight of dice rolls in our favor which helps. It also helps us deal with multiple army types with some ability (Although not extremely efficient ability without re-rolls)

I guess since I already mentioned monofilament I should rave about how damn useful Warp spyders, and Weaver platforms are. The speed of spyders and the efficiency of their weapons are invaluable and the ability to take 8 without an exarch at just over 150 points makes them cost efficient to raid objectives and contest them late, as well as deal with other enemy units that are an issue to deal with.

Now I should also note the Wraithknight and why I like them and have ordered two of them. I am use to running two lords and have in every game so far, they are still good and useful. Putting two into one and giving it a jump pack and more efficient lance weapons is only a plus. Yes it has some serious hard counters but it will be more useful in the future imho, yet I need to test them to be certain.

So we have the scoring tools, speed, and survive-ability with decent fire power output and some duel ability to deal with small infantry and heavy ones just alike. This makes this very viable tournament ally or primary detachment at least. I have plans to take an ally to the Eldar I have mentioned and bring them to Feast and I am liking what I am seeing in effect to plugging the holes Eldar as a primary leave, but that's another post.....happy gaming...more on this later.