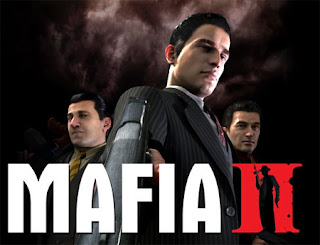 Hey all instead of painting my days have been consumed by Mafia II these last few days. It has a good 20 hours of GTA style play but is a little more story oriented and the story is awsome. Great cliffhanger ending, made me want to punch my xbox for not continueing. The way I get games is usually by playing way too many demos on my xbox and when I get a demo that I just cant put down I get the game. It was like that for Left 4 Dead and Mafia and it didnt disapoint. Get the demo atleast for Mafia II. It is a big demo in comparison to others. Gives you a pretty large mission and an open world too knock over some stores or something. Lots of fun and you can walk around in a trenchcoat with a tommy gun, how cool is that! (You also get to play in WWII in sicily, what WWII game do you get to fight Mussolini's Italians? None which I am surprised you dont see italians in WWII games even though those Operations were huge.) Try the demo, its free. Vito Scolletta sends his regards.

Alright the New England Gaming Clubs up is on and is schedualed for Saturday Febuary 5th in the morning at TempleCon. It is almost a mirror image of the ETC in setup. I will post the official rules in a post later on.

Also Announcing another event at TempleCon that yours truly wrote up and will be runnning, inspired by Fritz's Gamesday event.

The Order vs Disorder Meat Grinder Event!
It is a lot similar to the event Fritz and BFS ran at gamesday on a larger scale and with prize support. It will be a lot of fun and will be run Friday night at TempleCon. Come and leave the table, it may last all night...or atleast until the Midnight Apoc Madness tournament. Bring your 750 point force with atleast a troop, hq and HS choice and join your respective side. (If you want to get on to the table for the first turn you will have to be registered for the Con and sign up in advance. Official Rules will be coming up in a future post as well. This is the first 40k event I will be running at this scale and I want it to be a success so if you like big games come down to the Long table!

Battle Report Week!
Now I have scheduled more games this week than I have all summer pretty much. So I am gonna shell out 5! Batreps over the next week featuring my Poor Man's marine List and my Chaos List. I have posted one already. Im sorry that youtube killed the the quality and darkened my video, I will upload it in better quality in the future....stupid youtube. Expect the following Batreps


A lot of Content coming up, Remeber hit the Follow button so I know how many of you guys read this! at 200 Followers I may give something away! ;)
Posted by Kevinmcd28 at 10:33 AM