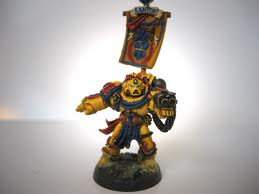 Hmmm the ideas I have browsing a codex....


Ok So just sitting around I started to think about an awesome List I could field for fun at a FLGS tournament and basically win off the fact that no one would ever play that list so no one would be able to react to it. So I came up with this, The SternTerm Strike List. I got to use Pedro for once and honestly it is not that bad, but it does have weaknesses. Honestly its a pretty silly list using all the models you bought/have but never use with all the razorspam these days.... so here is the list....

(Locater beacons are on the pods fyi, not the Sternguard)
First of all at 2000 points it isn’t a whole lot. A lot of the points went into Standard Terminators, so I know the first thing you said was “WTF regular terminators without even a raider?!?!?” Then I probably got a few, “WTF a 4 pod drop-pod list? So only 2 pods come in first turn so you get wiped out easily?!?!?”

Ok the 2nd thing I said you probably thought is the major hole in this list. Only having 4 real things on the table first turn (The speeders and Sternguard, the pods don’t count in my opinion). Here is how this list should be played. You take 2nd turn and have the speeders back out of sight. After your opponent does very little your 2 pods come down with Pedro as well as 2 stern squads. Pedro detaches and does w/e he is good at, preferably a good orbital bombardment (if he even can, not sure). Sterns Melt some raiders and other tanks. Speeders move out of cover and burn up a couple transports or other vehicles. You weather the storm and turn 2 hopefully most of what remains comes in. Terminators teleport next to the locator beaconed pods so they don’t scatter and dakka/burn/rend some transports as well as enemy units. So now your enemy has 20 pissed off terminators in his lines as well as AP3 bolter love. Plasma vets take out some heavy infantry. More melta vets destroy some more vehicles. Melta from the speeders hopefully mop up the mech. Stern take objectives.
Now this list is not ment for your next GT, and would probably lose. It is more of a finesse list utilizing every model you do not use that you have (Sternguard, Pedro, pods and Regular terminators). Honestly Id rather run a version of this at 1500 with only 2 Terminator squads (one Assault cannon another with a HF and minus a Land speeder).
Hmm if only a certain club leader that I know had these models for that 1500 point version or smaller for any future Newport Sillyness missions tournaments……. ;) jk Tera I abuse your hospitality enough as it is.

More on this in the future, any opinions on how this would do at the three levels? (GT’s, FLGS tournaments, and friendly games). I think it would be a really fun list to play for your pick up games….
Posted by Kevinmcd28 at 8:51 PM