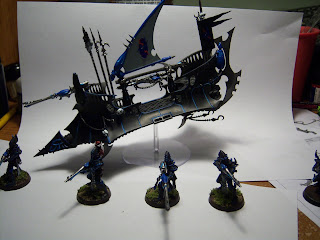 First of all I would like to wish everyone out there that reads my articles, as well as everyone else in the world, a happy new year especially all of our soldiers over seas, I have a brother in the military and I know you guys need it the most. =)

Ok on to the meat of the article, P3 primer. I actually started using the white primer awhile ago and it worked well for the red world eaters models I built back in 2010 (oh so long ago lol). It did work well enough but I wanted to try something else so I went over to a can I will not mention, but most of you probably know what I am talking about, but has cartoon soldiers and people on it. now after having to save quite a few models from that powdery thick mess I learned to appreciate the P3, Privateer Press has come out with a good product here. Now I do like to stick to Citadel Paints as my personal preference but all P3 paints are a good substitute as well.

For my Dark Eldar army I had to find a good black paint to cover the models. Now I have always been a white prime kind of guy since it is quite a bit easier to paint over than a dark primer yet you would have to deal with white spots popping up. Since my army was going to be a black Army a Black Primer was an obvious choice. Now I did want to try Army Painter Black but it is a little bit pricey when your a cash strappped college student like myself when you need a few cans. So I decided to go to my old standby of P3 Black Primer and I liked it a lot. Originally I wanted to paint the models chaos black after I primed them but after the first warriors came out I decided to neglect that because the look of the models was very satisfactory. They didnt come out powdery like other primers and they still left all of the edges and details sharp. Another thing I liked was that the P3 black blends really well with Citadel Chaos Black. I noticed this mopping up a few mistakes I made. So far it has a good hold on the model itself with none of it chipping it off and it held the GDubs paint on it as well. after viewing some Army Painter painted models I can say it works just as well as Army Painter with being only 2/3's of the Army Painter Price at $10. The picture above is of some models painted with this primer.