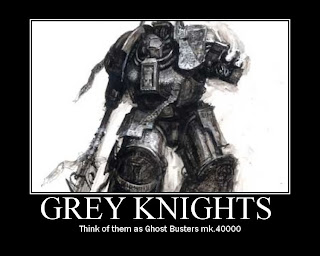 So did the boys n Grey bg boy pants get nerfed? Lets see (I'm skipping a few of the ovbious ones btw)

Well this just seems random, odd mix up or an arguement at the office? we may never know

Well this just nerfed my CSM. Another nail in the coffin of that codex. The funnny thing is that, specifically daemon princes as an example, they technically are not daemons in thier troop type....unlike the bunch. Now yes it is in thier name and fluff but rules wise thier is nothing to make them daemons. This is example #1 of two instances of ths codex leaning towards Rules As Intended instead of the INAT Rules As Written standing.....And Dark Eldar are not daemons, they are super anti-psycher and anti-chaos yet why are they included? Since when are Olbits daemons too?

These both just proved Psyflemans can be annoying on two fronts and not just one. also the combat squading point is interesting as I never really thought of UA in that way.

Q: If a Grand Master gives a unit with personal
teleporters the Scouts special rule, can they use the
shunt move as a part of their Scouts move? (p22)
A: No.

Probably one of the only instances in the FAQ of a tactic being nerfed, sorry Goatperson....your strategum just got pwned....

Now I always thought this was funny since the jump infantry would technically replace the MC part...so dreadknights that could get cover anywhere and get into storm ravens was a comical thing to think of. an obvious ruling but atleast it was made...

Q: Does a Dreadknight with a Nemesis doomfist strike
at Strength 6 or Strength 10 in close combat? (p34)
A: Strength 6, as it is not a walker.

I talked about this with my Grey Knights buddy, and Marcus you were right...interesting since most people thought the ruling would go the other way....

Q: Can models in Terminator armour embark onto an
Inquisitorial Chimera? (p51)
A: Yes.

wow....that was from left field...who knew a chimera could hold termies and not rhinos....I can see a lot of terminator characters attached to a bunch of storm shield wielding guard guys as protection...

Q: Do Nemesis falchions count as 2 close combat
weapons and thus give +2 Attacks in close combat (+1
for their special rule and +1 for wielding 2 close
combat weapons)? (p54)
A: No, they just give +1 Attack.

Yeah aother rules arguement from prior games/discussions. I still think it should be ruled the other way since isn't a Falchion 30 points and for only 1 extra attack? Not worth it....

Q: Do you take into account the strength increase from
the psybolt and psyflame ammunition vehicle upgrades
when working out if a weapon is a defensive weapon
or not? If a vehicle has either of these upgrades, must
you use them? (p62)
A: Yes to both questions.

I still think its not worth it to equip a LR Crusader with psybolt. It takes away a lot of its punch....

Q: Does the effect of servo-skulls stack? For example
would it reduce the scatter distance by 2D6 if you are
within 12" of two? (p62)
A: No, it would still only be 1D6.

Aha! Marcus I was right....This isnt much of a nerf but it does effect some stradegies.....

Q: What counts as a plasma weapon for the Ulumeathi
Plasma Syphon? (p62)
A: All Plasma weapons, as well as Eldar missile
launchers firing plasma missiles, burst cannons,
starcannons, all Tau pulse weapons and any weapon
described as using ‘plasma’ as its effect or in its special
rules.

Probably the 2nd reference to RAW vs RAI debate. A lot of these weapons are not plasma in rules but just have plasma in the name or description....Tau got nerfed a little by this...

So no nerf really. If anything a few things got a boost, and two other books got worse.....It's nteresting to see GW lean towards RAI instead of RAW in that debate....any thoughts. emember this is only about half the FAQ

(All text in pink writing is a direct quote from Games Workshop and is not owned by me. Quoted from http://www.games-workshop.com/MEDIA_CustomProductCatalog/m1830601a_Grey_Knights_v1_0.pdf)