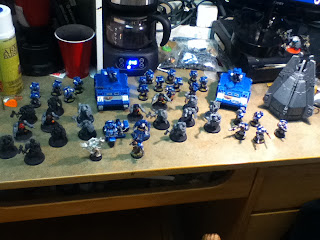 New List (minus scouts)
Hey All Kevin here to go back to lists. Here is my list that I will be using until 5th edition closes and morphs into 6th edition. I call it the Alpha Shrike, muahaha, and its based off two different list ideas. It is not uncommon to see a true Shrike infiltration list around the country. They are not that common but common enough for it to be known. I am also stealing an idea from a local player who﻿ tried something similar against me at a tournament but not exactly like this. He would drop in a drop pod with a locator beacon filled to the brim with sternguard and then use a librarian hiding in a land raider with 5 assault terminators gate of infinity forward. He would then not scatter due to RAW interpretation of the rules, which the local store has deemed legal. Since a locator beacon causes units attempting to deep strike with in 6" of the pod. Gate of Infinity states that you take the unit off the board and place it back in as if deploying from deep strike. Now skeptical me has decided to attempt something similar to this, except a little bit more over the top. I would of course double check with a TO ahead of time to make sure they interpret the rule the same way but I have yet to see any issues with everyone I have asked interpriting it the same way. Yet even then scattering really does not effect this list too greatly....
HQ
1. Kayvaan Shrike
2. Librarian, Epistolary, bolter, the avenger, gate of infinity
Troops
1. Tactical squad x10, missile launcher, bolt pistol/chainsword
- Razorback, TL Lascannon
2. Tactical squad x5, bolt pistol/chain sword
- Razorback, Las/TL Plas
3. Scout Squad, Camo cloaks, sniper rifles, missile launcher
Fast Attack
1. Attack bike x1, multi melta
Elites
1. Assault Terminator squad x9, 7xTH/SS, 2x LC's
2. Assault Terminator squad x9, 7xTH/SS, 2x LC's
3. Sternguard x5, x2 meltaguns, x3 combi meltas, powerfist
-Drop pod, locator beacon, deathwind missile launcher
﻿So a fairly simple idea. I let my opponent deploy first in order to try and get him to not hide in reserve. Then I deploy out the entire army but the sternguard and shrike with his termies. Then I infiltrate shrikes terminators up and spread them out to try and net my opponent in. Maybe seize, if so then I am good if not oh well... My opponent will probably try and nuke my termies while they are on their own so I weather the storm. My pod comes in and nukes something. while my librarian gates his 9 termies forward....also probably avengers some 3+ save punks thinking they are safe. Then I move and fleet forward. Turn 2 I mass multi assault with shrike, the libbie, 18 assault termies and the sternguard.....attack bike will probably be in range to nuke something...Anyway a fairly straight forward list...Likes? Other marine players, tau, imperial guard, footdar, foot lists, assault based lists, etc.....hates? Mechdar, Dark Eldar, storm raven based GK and BA, bike lists....I am gonna have fun with these terminators for the remainder of the edition....there always is something about  a ton of fleeting assault terminators that screams come at me.....more on this later
Posted by Kevinmcd28 at 4:48 PM