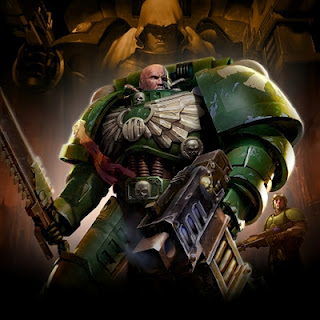 Nafka did it again, how do you get these sources....well here is the current batch of rumors.....btw the DA codex is due in October or November right? Here is what Nafka dropped for us to claw and tooth are way to like kids after a pinata has been broken.... I will post the rules but go check out the original source here it is an excellent blog then my thoughts will follow....


via Faeit 212 "A must remain anonymous source"
Here's a compilation of the most recent Dark Angels playtest.
Anything not included is because it's the same, or I didn't notice a difference.
The universal DA rules are ATSKNF, Combat Squad and Stubborn. HQs are all fearless.


HQ
Azrael
up to WS6, his gun is now a master crafted assault 2 12" 1 shot plasma, on top of a bolter. (basically assault instead of rapid fire, but can't fire at long range) and is fearless.


Belial
Also WS6, but is now 170 points and still unlocks DW as troops.


Interrogator Chaplains
140 points, all units within 12" are fearless, not just his own squad
Rerolls misses and wounds in challenges. Interrogator chaplains that win challenges against Independent Characters give you +1 victory point in a mission that uses victory points.


Elites
Chaplains are now elites and cost 100 points, but you can buy 1-3 of them as a single choice. They can be upgraded to take specific banners. At the start of the game they nominate a model in the squad they're attached to to be their "banner bearer" who must be modeled appropriately with the specific banner. If the chaplain later leaves the squad, the banner remains.


Deathwing Terminator Squads are 215 points base, can swap to lightning claws for free, pay 5 points for thunder hammer / storm shield, and only models with storm bolter / powerfist or chainfist can take the cyclone missile launcher upgrade, which is now 30 points.
Deathwing assault works a little bit differently. All Deathwing units and models in terminator armour attached to Deathwing units now come down on the first turn via deep strike without a roll if you wish you make a "Deathwing assault."
It specifically notes, however, the limitations of no more than 50% of your army being allowed in reserve, and that independent characters whether attached to a squad or not, count as a unit.


Dreadnoughts are a bit cheaper on points base, can be upgraded to venerable, and can upgrade their dreadnought close combat weapon to any ranged weapon (not just missile launcher or autocannon)


Fast Attack
Assault squads can remove jump pack, and get a 35 point discount on transport vehicle instead of a rhino/drop pod for free, but are otherwise unchanged.


No upgrade for Devastators to take skyfire flak missiles.

Ok so we have some good stuff in here. It goes in line with one of the few released rules designer comments we have gotten by Phil Kelly himself stating that fi they are going to make niche marine chapter books they have to be a lot different than standard vanilla.....and we have an excellent representation here. First thought is man did deathwing get expensive. Belial is a lot more pricey and a unti of 5 TH/SS Termies is now 240 points.....kind of pricey especially since you cannot take a cyclone on a TH/SS guy which is btw a 30 point upgrade....hopefully these units can go up more than 5 guys per unit since LC's are a free, and arguably, better upgrade these days. Yet I never planned on running a pure deathwing anyway as Ezekial is my boy. Also I would like to know how much an Ass. Cannon is as that is what I would like to run in all of the units.

So a change over from DA old Vets to sternguard yet they can still drop shooting weapons for CCW's like they can currently.....so a couple of storm shields up front might be nice....if they have the ammo from vanilla marines these guys are going to be used by me....especially since chaplains can apperently improve or nerf overwatch when camping objectives.....in the elite slot they will be like sang priests probably with a 1-3 per slot. Interrogator chaplains getting the basic warlord challenge=VP's trait is nice if you roll for it....but my passion for running as many special characters in recent has taken hold of me so belial and Ezekial may be it for me....haha Marcus will love that one.

Elites seem very gongested as you will never see scouts unless they have an awesome unkown ability...this slot is very gongested taking up chaplains, deathwing, sternguard, scouts, dreads (maybe or they could be HS)...etc, etc, etc Assault squads w/ free rides seems cool too

Now heavy support is where we get all of the love with a rumored 2 shot plasma cannon turret....this is going to be WAYYY more useful than a normal one if it isnt stupid expenisve, like it will probably be. Now Whirlwinds having skyfire was kind of a given and it is included as a 15 point upgrade....nice.

So in general, without looking at points but looking more towards

Now with knowing our luck that being 2500+ points I hope this looks to be true as that army would be pretty cool to run....since I already started painting a Guardians of the Covanent army (a dark angel unforgiven chapter that works in the same sector as my storm wardens) , as Vanilla allies, I will probably
just do them instead of chaos.....hopefully this codex will rule...more on this later
Posted by Kevinmcd28 at 11:12 AM