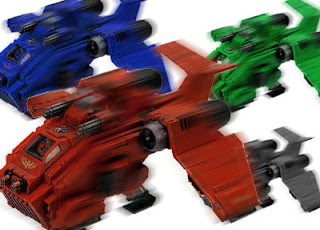 Hey all, Kevin here to return to my blogging origins of posting concept lists and going into why and why not running them. In this case its about what I will bring or not bring to Feast.....And yes I know that's a little far out (About 5 months) yet its never too early to plan ahead...especially since I will be stranded from playing 40k for most of the next three months until September....

So since I am planning on going to Feast (Anyone know when it usually sells out I need to wait a bit before I can buy a ticket?) I have to look at all of my options and they are Dark Angels using my Deva-Raider List, I can wait and see the new Eldar and run them as I originally planned, or I can go to my constant companion of using the Vanilla Marines Codex...although we will not know if the rumors are true that we will get a new Vanilla Marines codex sometime in August or September...or even if they would be legal at Feast lets look at a concept list I have been working on that will still probably work in a new book anyway....Vanilla Skies!


So I have jumped around a few versions of this list but have settled on this, and there are a few odd things in it but lend to what I would want in a Flyer list.....

First off it is not all flyer you may notice, original versions did use three Storm Ravens and three Storm Talons yet this one drops a Raven....so why? Well soon enough after I first thought to do something like this I realized the prevalence of skyfire in newer codices especially int he new Tau Codex. Even a Soulgrinder is a decent skyfire platform that's hard to shift at a distance. I needed a tool to be a preemptive strike to come in prior to the Flyer wave to take out any skyfire threats immediately without being delayed. I have this in the Sternguard. They will come in with their two pods and split into three units, with combat squads equally divided with multiple melta weapons... since most armies only have 1-3 skyfire units taken in an army on average imho, to drop in and strike in order any Interceptors, skyfire platforms, or anything that has a decent shot of taking down a flyer. If none of these are there then they can take out any enemy unit that will be a pain for my Flyers to take out or even troop choice snipe. If all of these things aren't needed I took Pedro, just because the more scoring the merrier and I have a converted model, to make them scoring so any survivors can just hide on an objective. Or they can just drop on an objective. Now you can say that Khan giving outflank could be more valuable but I like this approach better.

Next we have the scout units and thunderfire cannon. They are my start on table units, meant to hide and camp objectives when needed or even infiltrate on to one. The thunderfire is there to take the extra pod so my  Sternguard all come in at once turn one, or even I can drop an empty pd from it if needed. It then camps during Big Gunz games or harasses troop choices camping objectives.

Finally we have the 5 flyers, Two small Tactical squads to hide in the Ravens then jump out on to objectives at end game. I took a bunch of anti infantry weapons on the flyers in order to help take down the infantry heavy meta as well, and of course tons of TL Assault cannons and a couple multi meltas.

So the Game plan is simple and effective.  Hide scouts and thunderfire cannon on objectives. Turn one Sternguard drop in and Eliminate the enemy skyfire threats and possibly, if they survive, camp on an objective. Then the flyers come in and take out  as many enemies near objectives as possible, with thunderfire support, then late game hop down on needed objectives with Tact. Squads....simple yet an effective plan and it has things to preemptively take out skyfire. I like this list quite a bit and am working towards having it.

Now I know Feast is awhile back and at this rate a few more codices might change things before then yet I still like this list and I believe it will work...and I can only use it if I only play the Open and not the Invitational although making a qualifier will probably not be possible for me....

So this will probably be a long term article series seeing articles after Eldar and possibly even the new Marines books drop...As well as when I decide on what to take when we get closer.....until then more on this later.....

So what are your thoughts? Anyone else going to Feast? I am moving to Denver, near the Aurora border near East Colfax (Yes I know sketchy area). Are there any game clubs/stores near there I should know about that are cool? I am looking for a new 40k buddy to play on a consistent basis too so just contact me here closer to the fall and lets see what we can do, I am looking forward to it......and yes I know Feast allows Forgeworld and I want to take Flyers