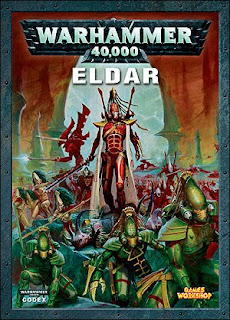 Now last night I got to play Eldar which is a rare army to see around my area. This was actually the first eldar army I have seen in my area ever. So of course I immediatly jumped at the chance to play this guy. His name is Josh and I played him at Dragonhead distributers in Bethlehem, PA. Ironically he only lives a mile from my house yet we drove 30 minutes into Pennsylvania to play a game. Eldar is going to be my next army when thier dex comes out so it is interesting to play them. The video battle report will be posted later today.

He had a decent build at 1500 points. Farseer with jet council, 2 Fire prisms, a nightspinner, 2 wave serpants, 2 squads of DA with bladestorm, and a 6 bike jetbike squad. Decent list. His farseer had fortune and doom. DA's were in the Wave Serpants. WS's had energy fields and the other tanks had holofields. He said he tailored this list to Orks. Now I dont believe in tailoring lists because in a tournament you don't only play one army. I am an all comers guy, plus my list almost never changes and is posted online.

Well between holofields and energy fields I would always go with holofields. The way it worked out I would just always shoot my missile launchers at the energy fielded tanks and my melta and TLL at the holo fielded ones. This negated out the energy field advantage. Plus making you roll two dice makes it very hard to actually knock down those tanks.

Bladestorm is cool and all, but you shouldnt take full squads of DA's. It is a points sink. Two squads of 10 isnt necessary. 3 squads of 5 would do just fine. DA are not all that great other than a bladestorm here or there.

Jetbikes are fun to toast with plasma and flame when they are all bunched up hiding in cover....legion of the damned with relentless rule...

I left his seer council in a position of confusion with what to do with them. I did'nt give them a good target so all they did was turbo boost around. Libby's do have a sphere of influence over Eldar.

With the ammount of decent tanks eldar throw on the table with holofields and the mobility of them I basicly spent the entire game worried about them turbo boosting and contesting objectives. I only wrecked one. The way I got around this was on turn 5 I circled the wagons around an objective by surrounding one with a Land Raider and a RB effectivly making it uncontestable (See the video). Late game contesting is the trick of the trade for eldar with sieze ground beign thier game.

Between nightspinners and fire prisms? A mix is always good. If playing against Horde I would play two Spinners and one prism. anyone else I would play 2 prisms and 1 spinner. The only targets my opponent had with his spinner was my static missile launcher units, which did'nt move making it useless compared to a better prism.

More to come on this topic in the Future. I will write another similar post next weekend on either Necrons or Nids...