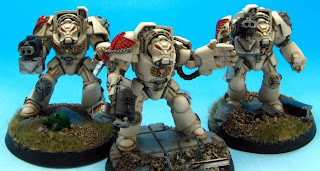 Hey all I started to think about a recent BoLS post about Regular terminators and can they still be viable, so Legion get pushed to a future post. Why did I start using them? Because that was all I had. (hence the whole point behind why this is called the poor mans list). I developed these techniques over time to make it viable.

Now as a Death star unit are Regular standard termies vviable? Yes and no ...

At small points levels Regular Termies are more viable because there are less ap2 and spammed power weapons at these points levels. Larger points levels make them too much of a points liability. You also need to treat them differently than our typical TH/SS and LC Termies. Read on to find out why but first an explanation of this army as a whole.

This list is what I like to call "A torrent of firepower list". It doesn't rely on long range pie plates or up close assaults. Instead it relies on the shear ammount of bolter fire it can turn out. I generally will look like I am losing until my opponent gets into rapid fire range, then the tables turn. Watch my recent BatRep against Eldar. I was getting kicked around the table until my Land Raider and the rest of my stuff came into bolter range. Then I just tore my opponent to shreds.

My Termies rely on a similar idea to work. First of all you NEED a librarian in there WITH the Avenger (The other power null zone of course). You also need a heavy flamer. Get where I am going with this? (Vulkan would also benefit this unit in this style)

Now Why not an Ass. Cannon (yes I say Ass cannon, it sounds better to me)? I love Ass. Cannons, they are my favorate gun in 40k. S6 ap4 with 4 rending shots? It can take a chunk out of any squad and shred up transports. Hell it can even down a Land Raider if your lucky. It is an all comers gun. Yet as part of the death star it will not work. Ass. Cannons work best as twin linked (Who doesnt love twins?). You cannot rely on it in essentially an assault unit. Now you could run a larger 10 man unit with two Ass. Cannons as your castle guard much like I use the dread (future post) yet I like death stars so I need the points there.

Now I also like the Crusader for this unit. Mostly as a torrent of firepower (12 rapid fired TL bolter shots possibly and 4 TL Ass. Cannon shots rip units to pieces). With that firepower (usually Ill machine spirit the Ass. Cannon at another unit) and two heavy flamers as well as 8 bolter shots I can successfully cripple my target. The ap3 flamer template (the Avenger) is HUGE at 1500 points. On average your target unit is at best power armored T4 units. This kills on 3+. So 2 flaming death weapons followed by bolters galore usually equals about 3 or 4 enemies left. The perfect ammount for Regular termies and a libby to wipe out.

So lets review, this unit relies on a torrent of bolter fire and armor piercing, cover ignoring flame then jumping in for the kill. This makes up for the lack of SS's and LC's. Generally your enemy is mostly dead before you assault. If you go up against assault termies? Just use null zone since The avenger loses its ap3 advantage. Also then the libby can use a plasma pistol hopefully melting a termy. Ignoreing SS's is the bonus there. The bolter torrent and regular heavy flamer can usually bite down a termy or 2. Your power weapon attacks from the libby and Sarge can take down enough TH/SS termies with null zone active for your PF buddies to mop up. I have had this work for me and have wiped out enemy death star units composed of assault termies, yet it is a dance of perfectly chosing your targets and torrents of bolter fire. This all together makes this unit viable.

Next up on the Poor mans list discussion is my multi-target super castle technique and Legion of the Damned and why they are awsome articles....but as usual, more on this later.....
Posted by Kevinmcd28 at 5:09 PM