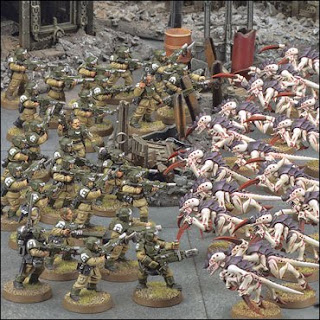 Hey all I am privilaged to be allowed to run an event at TempleCon this year. So I am taking a leaf out of Fritz' book and am running a Meat Grinder Style'd Mega Battle Event. Here are the rules. Please vet them for me and find any possible cheese. the more comments the better. Also any ideas or improvements are welcomed. I want this first Event of mine at the Con to be the best possible! Here are the current BETA Rules.

TempleCon Order vs. Disorder Meat Grinder Event
· Requirements to Play: Each Person must bring a fully painted army in accordance with Event WYSIWIG rules that is no bigger than 750 Points (May be smaller although).

Force Organization
1. Each Army may consist of at least
-1 HQ, 1 Troop, and 1 Heavy support
2. Each Army in ADDITION can take with the required units
- 3 Troops, 1 Elite, 1 Fast Attack
(***No more than 300 points may be spent on any Force Org. Section except for Troops. If a dedicated transport is taken it is to be included in the 300 points for its owners points allotment. Each Person attending the event must have a list written out detailing points, it may be hand written. You may also bring more than one list to be used involving different units. You can also bring multiple different armies to play but may only use one list/army at a time. The only restriction is that you have to stay Order or Disorder throughout the game)

· Sides: Sides will be made up by Order Armies vs. Disorder Armies
1. Order Codices- Codex: Space Marines, Codex: Blood Angels, Codex: Black Templar, Codex: Dark Angels, Codex: Space Wolves, Codex: Tau Empire,
Codex: Witch hunters, Codex: Daemonhunters, Codex: Imperial Guard,
Codex: Eldar
2. Disorder Codices- Codex: Chaos Space Marines, Codex: Orks, Codex: Dark Eldar, Codex: DE: Wyche Cult, Codex: Chaos Daemons, Codex: Tyranids,
Codex: Necrons
· Scenario Special Rules: Infiltrators, Deep striking, Scouts. *Army Respawn
*Army Respawn- If your army is completely destroyed and off the table it respawns as if it were coming out of reserve on your table edge
*NOTE*All deepstrikers come in as soon as the army is deployed, they are deployed after all scouts and infiltrators as well as regular armies are deployed. THERE ARE NO RESERVES IN THIS GAME. You can NOT hold things in reserve, everything must be deployed ASAP.

· Initial Setup: 15x4 foot table the order Team will deploy in a 1’ deployment zone along one of the 15’ table edges with the disorder team deploying on the opposite side. Each side will deploy one of their player’s armies simultaneously with the opposite sides. Each Person can spend no more than 5 minutes deploying their army or it will have to wait till the next turn to deploy. Repeat till both sides have deployed all armies. There will be 5 Objectives. 1 Directly in the middle of the table with objectives placed every 3’ along the center of the table down both long ways of the table. Then both sides have 5 minutes each to place all of their scouts, deepstrikers, and infiltrators. A roll off will take place to see which side goes first. This 5 minute period will be allowed before each teams turn throughout the game.

· Armies that have been wiped out will redeploy at the start of their teams turn as if they came out of reserve, scout moves, infiltrating, and deepstriking will be allowed by these units but must be done in their teams 5 minute redeployment time before their turn starts.

· Objective Scoring: At the End of Each teams respective turn (I.E- 2 times for turn 1, 2 times for turn 2, etc) Claimed objectives will be added up. Whichever team controls the most objectives earns everyone on their team a ticket for the drawing. Any player on the team that controlled the most objectives and was claiming an objective gets a single extra ticket. At the end of the event the team that won the most turns earns their everyone on their team that played a bonus ticket for the drawing.

1. Any unit may claim an objective, not only troop choices. If an objective is contested whichever team has the most units in claiming range of that particular objective is considered the team that holds the objective. If no team has clear control of an objective that is the only time an objective can be contested. Normal rules for claiming an objective will be in use other than those listed above.
(If no team has clear control over the majority of objectives, then whichever side eliminated the most enemy units, killpoints, is considered the winner of that turn. Each person will have to keep track of the units he has destroyed if this is the case. No bonus tickets will be given out for controlling an objective that turn)
· Each Team will have 7 minutes to move their forces, each person is responsible for his own units but may help a teammate if he is done with his movement. Then Each team will have 8 minutes maximum to shoot all of their weapons followed by 10 minutes to do their assaults. If any movement or shooting doesn’t happen in the allotted time then it cannot be done. If an assault is not done and finished in the allotted time then the undone assaults will consider the attacking unit has lost the combat and suffered 6 wounds (saves allowed as normal). (This is to keep the game going with the maximum amount of drawing tickets being given out. There will be 10 minute breaks between each turn allowed. Possibly longer depending on scenario. 750 points is not a lot to move shoot and assault, 25 minutes a turn is a lot for that few models. If all the time is not used and the team finished the phase they may use that time in the next phase. This extra time does not carry over turns although!)

· There will be various interactive pieces of terrain (such as weapons emplacements and bunkers) These will be detailed on the board and explained. (Example: a assault cannon emplacement in a building that 2 models from a squad can man, individual rules will be detailed at the event).
· Other than the overall prize drawing at the end of the event. The Scenic Objective markers will be given away as well as numerous other small prizes and awards. These will be detailed after the event is over.
(***If sides are not equal an organizer will deploy an extra 750 points till the sides are even, if a player joins he must wait till sides are equal to join in. No more than 10 players per side at any given time. If a player wishes to join and the table is full he will replace the next person that has his army wiped out, instead of the person’s army who gets eliminated respawning and that person will join the queue to get on the table)
Posted by Kevinmcd28 at 8:24 PM