Space Wolves will still be on Top by Years End: Dark Eldar Thoughts 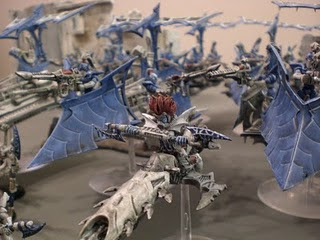 Yes I am talking about the Dark Eldar Codex bomb.....

This is JUST speculation, a little early coming but still this is still just speculation from my talks with people about Dark Eldar and after talking to people who have read the codex from the black boxes and such....

I am gonna say that Space Wolves will still be on top by years end....why such a claim? Well in my oppinion there is one unit that is gonna resurface after the DE bomb hits, and that is the devastator squad and its talented cousin, the long fang unit... In my oppinion this is the unit that will be our counterbalance to the DE.... Yet I'll still get DE since I want a Xeno army that is competitive....plus they look cool...not for awhile although

From what ive read and discussed todays razorspam mech style is gonna take a hit from the Dark Eldar.... Thier Darklance spam just got a lot better and faster. Razorbacks are gonna become a liability. This is also why I believe rhinos will make a comeback in the greater 40k scene. Mostly because they are cheaper and can transport more models and still have a way to shoot LasPlas. I also believe the heavy bolter and plasma gun will start to appear more. AV10/11 and open topped means that these types of weapons will be more viable and necessary. When this super fast light armored thing comes speeding by high volumes of medium firepower will be needed to bypass the insane cover saves it will get and take it down instead of one heavy strength shot. Plasma has been a darkhorse for marine armies, not seen as much but will pop up against a new DE army somewhere, sometime and will be the death of the AV10/11 spam....

I believe, at this point, that we are gonna something along the lines of this for the new DE tournament army.

Lelithe (I believe is the name, spelling hack) with incubi in a raider with +2d6 sail
10x3 Warrior squads with DL each in a Raider witht he +2d6 sail upgrade
10x2 Wyches in a Raider with the +2d6 Sail
x2 Ravenegers
Bomber/fighter


This army will do what DE did but a lot deadlier and a lot faster with a lot more assault effectivness. They will be in your face turn 2 guarenteed with wyches gaining special rule upgrades each turn. Pain tokens will be your enemy. So it becomes a game of fighting the turn counter. Stop the raiders and get them on foot to be dakka'd to death. So lets let thier speed play against them. Remember they are now in rapid fire range with paper mache armor values. Let them get into your lines turn one with the sails and blast your mech to pieces. Yet they can not touch the foot heavy/rapid fire weapons as easily. These are why they are at the advantage. Razorwolf becomes a liability yet the long fang will prosper. Take out the transports and focus on the wyches before you reach the warriors. Counter assault and weather the storm. This will become a game of "can you stop the raiders and burn the wyches"

Ok So i designed what I believe will be an optimal list to fight DE with using Space Wolves. I will admit I do not play the puppies yet I believe this list takes what Space Wolves do and focus it on the heavy ammount of medium strength shots needed. A lot more of plasma and heavy bolters than normal as well. Razors are being taken out because of cost and the fact they will be toasted turn one. DE will be getting turn one in my head when I thought of this list. I believe it can survive the storm. Rhinos are cheap and can shoot plasma out of the hatches to take down that cardboard star wars ripoff transport spam. Some counter assault and terminators for some heavy hitting when the enemy gets close as well as assault cannon love. No land raiders as they crumple under the weight of lance weapon spam as well as are a points liability for what little they can make up in thier short lifespans. Then of course long fangs maxed out for they will be our key to victory. A double HB speeder for filler and more bolter fun... (please feel free to correct any errors,as I said I do not play puppies)...heres the list....

Compared to what we see today this list is radically different but remember DE are gonna be a radically different army. They are the anti-razormech/speed enduced close combat machines. A war of attrition will be what they aim for/excel at. Now for a game today this will not work (mostly). Yet I think this may be something in the future that will be seen at tournaments if DE take off as a big GT army. I'll follow up when I actually get to read the Dex and completely disagree with everything said here....
....All in all, to explain the method to my madness, my style has been a static heavy shooting element with a free flowing disruptive assault element (aka My Hammer and Anvil style). I believe that a multi model/foot heavy-shooting element getting a cover save is better than a mech heavy-weapon shooting one. This style will be the most effective against Dark Eldar nased on the facts we know. Space Wolves remain as one of the best static shooting element armies with long fangs. So therefore that is why I believe they will do best against DE as the Top tier codexes of today....
...definatly more on this later.....
Anything you guys think besides Rhinos with LasPlas Tacticals/Devastators will make a comeback? Please feel free to express your oppinion if or not DE will be a top tier codex or fall like nids...someone at GW must love wolves and Power armor because they both are still on top in my oppinion...
Posted by Kevinmcd28 at 9:22 PM