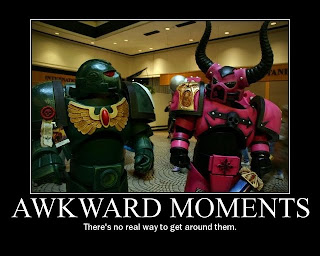 There has been this concept for a doubles tournament floating around the club lately I'd like to share with the community to get some feedback on. Here are the details

So instead of having a planned partner and list you would come with an army consisting of a troop and hq choice and can spend the rest on exactly half of the Force Org. chart (with a limitation on 1 Heavy/elite/FA to avoid problems). This way no one can over really on another army's troops or Support choices in order to win, everyone has to have a balanced list. Also after each round you get paired with a new partner. This will truely test a players mettle to deal with working with a completely random list and army. An individuals score will depend on how well they can work to win the game with a random partner. If they can combine efforts and put together a good plan they can score high for themselves, if they cant they fail and sink.

This way no plaer gets rewarded for trying to hang in the lower tables since they will get paired with a less able player, instead you need to play good to get a good partner. It also keeps out super teams formed randomly from the top two players possibly occuring. This way there is a level playing field with rewards for playing good. Upper point level ties willget seeded with the winners and vice versa.

SinceBoth players on a team get the same score but everyone has thier own individual score each player gets reseeded after each round. After the second round almost no one will have similar scores. So since each round will see new winners and new losers you get paired with someone new each round (almost always)

Here is the example of pairings

I believe a system like this would be a fun new challenge for a doubles tournament. Also it could prove to be a competitive challenge for the hardcore gamers out there. Since one player will have the highest score there will be only one winner. A good system or bad.....more on this later.