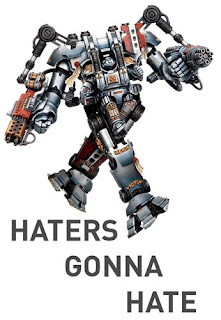 Well it happened. Brad Chester took his GK list, what looked like the typical psyfleman dreads, some henchman including death cultists, and some purifiers with halbards....I would follow up with BOK if you want to get a list probably in the next day or so. He trumped Tony Kopach, infamous for his showings at Adepticon last year and multiple Nova Open stompings with the mythic 3po title, and his wolves for the win. Tony Kopach, with his experience, shown talent, and dastardly decent following couldnt hold on to upset the favorate army to win. We also saw Alex Fennel being downed after being a top seed after the first day.

Are we surprised by this? Well with this probably being the last Major GT before 6th we kind of saw this coming...I had my doubts since I had Tony winning the whole thing going into the day...he has experience with this list and in this enviorment. The final round was KP with objectives as the secondary. From what I saw it came down to turn 5 but GK sealed it then...Good job Brad....lets hope CSM unthrones everyone
Posted by Kevinmcd28 at 2:15 PM