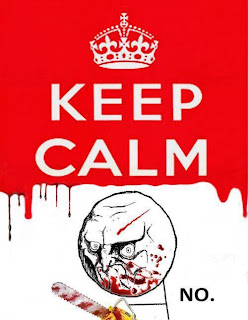 (The Internets current opinion on this topic ^ not mine)

OK all, so the summer is around the corner and since I will be stuck up in the boonies in Northern Maine without a gaming outlet I will probably write on the blog a little more often. Hopefully more on the tactical 40k side of things soon to follow

Now Since the last time I tried to get into the Legal conflict regarding our little hobby I made a few errors) I will try and only use the facts as represented and share my opinion on them. You can take what you want from both. There are two major blogger wars going on right now...to the point where it kind of is a little amusing to watch this....Now this is the older of the two so its nothing new. I would just like to see some healing in the community.

UPDATE: Interestingly enough I found out after writing this that Romeo went on to get interviewed by Pat from the 11th Company that day. Since we didn't record last week and put in a buffer episode I think it should show up in next weeks episode if not the following but Pat can clarify this himself :)

UPDATE 2: Pat was nice enough to throw up the link to his Romeo interview on the topic, I haven't listened to it yet but I will not change this article yet I may add updates at the end...here is the link


I will try and be Switzerland in this Foam War folks....Ok so the older of the two current wars going on is the newest Case of Romeo ,and his company, Battlefoam vs. Tastytaste of the blood of Kittens Network. Waging two decently controversial community figures against each other Basically the background of this case is that Tasty, if you don't know of him for some reason, is kind of the Bill O'Rielly of the 40k Blogosphere. He says some fairly controversial things from time to time in a firebrand/edgy sort of way. It has earned him some fans and enemy's over the years. Recently he wrote a article slamming The owner of Battlefoam, Romeo, over some alleged grievances that have been building up in the community against him with apparently evidence to prove this. Romeo did not take this lightly and quickly had his lawyers send a Cease and Desist to Tasty basically asking him to retract the article, apologize  and pay his lawyers an amount around two grand in US dollars alleging that all of the statements were false and lies.

Now Tasty quickly responded by getting some pretty strong Pro Bono Attorneys and suing Romeo in order to counter any payment to Romeo or further legal action. So hence the Foam Wars have arisen again.

In reality these allegations Tasty made have been stirring in the community for awhile now and were decently well known before this even came up on BOK. So its nothing new what Tasty said. Romeo does have a fairly controversial past with the lawsuits during the infamous "Foam Wars" as well as some actions some community members have laid against him.

This is kind of sad really since Romeo does have a great product. Heck I have a Battlefoam Pack GO Bag in my room. Other than an issue with the foam tearing and being deformed from the bag itself(explanation coming in my 500 days later review coming soon!), which the foam has a warranty anyway apparently, it is still a premium product.....Heck my cat uses the bag as a scratching post and there are no scratch marks on the bag at all, and she sits on it too...still in it is in great shape if it can stay well after all of that(It is impressive my cat has sharp claws)....

Now in many regards the community did a couple stupid things in response to all of this drama, like putting "Romeo is a D*****" stickers all over the Adepticon hotel. For one that is kind of childish and hotels like that need a good rapport with the TO and if the TO's guests are vandalizing the hotel it really doesn't help the TO. Plus its a pain to remove the glue and crap from the stickers and the hotel needs to do that quickly which is just a pain to the Hotel's cleaning/maintenance staff.....Really people we know it seems funny but it is a little childish...

From Romeo's side he has the impression that BOK's article will hurt his business  but really not too many people take Tasty all that seriously, he is more amusing than anything. I like to read his blog from time to time but I do not always agree with him. In my opinion, which really holds no weight in this, Romeo should play the part like any CEO of a company should do, Regardless of vendetta's or personal emotions the community has a bad impression from him from all these lawsuits and personal forum attacks that have happened. It makes the brand look bad. I would even be surprised that if Romeo came out and said "Hey I know we have had some bad blood with people in the past, but we are dedicated to our product and the community and want to be a positive image and promote the hobby"following this with an apology if he did anything to anyone in the past that he would see a surge in people buying his product. This and quit making lawsuits when they always get thrown out to my knowledge anyway and alienating the community  Doing this and other kind acts will always attract business and improve bottom lines. Tasty will always be Tasty but good acts will replace any supposed bad acts and the community would back it up eventually after healing. With nothing to sling mud against what bad things could be said about anyone anymore? Yet until these things happen even I start to feel alienated towards the product when I could always move over to other lines that go out of their way to support the community....its a shame really :/

I know, I am going all "kum by-yah", or however its spelled. But we are too small of a community to deal with the negativity. With GW's Hostile actions to indie retailers and constant lawsuits and bad blood being slung all around the internet we could all do with some good will....

Anyway I will stop being preachy. I hope this gets resolved and everyone comes out all the better. Till then the Blogger Wars continue!

So I would like to see some community input on how everyone hopes this gets resolved. Please no accusations or derogatory comments. Everything written above is based off of community knowledge or just opinions. Until this case is resolved in court any allegations made by either party are not true until decided by the court of law....so please comment on what you hope is the outcome of these blogger wars below.but keep it civil.

UPDATE 3: Comments and Opinion Post Interview
Well that was an interesting interview getting Romeo's perspective on this case. The first thing that popped out on me was the obvious. Romeo states in the interview that it is just a simple C and D ad was just asking Tasty to stop. Yet to comply with the C and D it would cost Tasty a couple thousand dollars.....which isn't really all that simple at least from my point of view yet that is just an opinion. It also gives a little insight into why a company would send out one of these letters which is fairly interesting. Still the fact remains simple that Romeo is just trying to defend his company from hostile blog posts which would cause anyone to send out a letter like this. The current RF vs. Dakka case also has some decent insight into C &D's as well. Now to put this into context I did actually get a chance to read Tasty's article when it first came out before it got blocked and it was venom filled. It also uses what seems to be a biased form of the stories that make up the case itself. It seems to me that it is similar to the phone call game....the original story is Guy walks down the street, by the time it reaches the tenth ear that guy also got attacked by a hawk and spray painted graffiti on someones house..if you get my point....there is probably  lot of exaggeration yet in any story there is probably a note of truth in the background. It doesn't mean you should take the final form as an ultimate truth. Romeo also seems to have some of the apparent story tellers retracting what they said and on his side of the case which is interesting

What we can take from the interview is exactly what Romeo says, which is basically he just makes the bags and foam, if you hate him for it you can but do not attack his business. It is not exactly humbling but it is business and I cannot say myself I do not agree with Romeo on that front as well as I cannot question his integrity there. Hopefully everyone learns a little about what is and what isn't OK to say on the inter-webs. It is now all of our job to choose who and what we agree with....

OK so I hope this is the last legal battle I comment and give my opinion on for awhile. I want this to be a more Game based Editorial blog and not a controversial continuum ....more on this maybe later....