40k Editorial: "Oh how rich we are" (In defense of small pointed games) 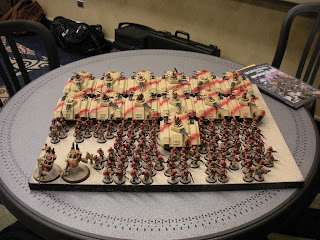 No this isnt about price increases or anything of that nature. Im writing this to follow up on a fritz40k blog post about Point scales in 40k.

Ok now to get the point Ill tell you a story from about a month ago in my old FLGS....

I was sitting in my local store, lounging around waiting for some 40k to be played as was my usual saturday miday ritual if I wanted to play a game. Then as normal one of the regulars walks in. There have been fewer and fewer 40k players around this place regularly so I have played him quite a bit....

Now lets just say I'm pretty sure he doesn't like me all that much. He has beaten me more times than I have beaten him yet I have never lost to him in a tournament. Actually I have caused him to lose tournaments because I would defeat him. Lets also say if we play a casual game he never forgets those defeats and likes to power game me in the jerkiest way possible. On one recent occaision about a month ago I was trying out my new chaos army using a non-competitive list that was pretty fluffy. Instead of a fun nice game he beat me around so bad and mercilessly that I really wanted to sell all my armies and quit 40k that day. Obviously I did'nt do that.

Anyway back to the story....

Now there were a handful of nice newbies to the game in the store that day. I like playing these guys and thier tiny battleforce armies and teach them a bit of the game. The ins and outs of little tricks here and there. So he walks in and I ask him if he would play my extremely new chaos army which he was fine with(now this was long before the game I described above, back when I had a third of the models I have now). I go on further to say how the place should have a small point tournament to help some of the new guys at say 1000 points and then I could try out my newly made army. I was happy about this army I fully funded myself and painted. I put a lot of work into this army. Anyway at this point he seemed horrified as if I shot a puppy or stabbed a baby and immediatly shot me down. I asked him why and he said he refused to play a game below 1500 points and even then 1500 points was a pain for him.

Here is our problem.

I have encountered this attitude among a lot of gamers. No one wants to play below a certain point level. For some it is 1500, for some 1750. My point is what is wrong with mid-small point games?

A lot of gamers have a problem when they can not use a power list with multiple death stars with melta and lascannons in the double digits. This is an addiction to most gamers. Heaven forbid they only have a couple lascannons and a handfull of special weapons.

Now I am a pro 1500 point level person (yeah I am one of those guys). This comes from basicly my Poor mans 40k list (see my post from a couple of days ago). It is not designed as a spamy competitive list. It is designed for mid-point games. I find these games more fun, quicker, and a lot more balanced. At these smaller point levels you can not field RB spam or multiple death stars. Even a couple of these absorbs your list. By forcing you to go back to the basic non-upgraded squad you balance the game to a degree. It opens the game up to more than just SW's and IG. BA RazorSpam a distant memory. Loganwing and Thunderwolf lists get confused looks down here.

Now let me explain it a bit. By allowing a more open game you invite what could be true competition. Any Joe can show up with a leafblower and win a game. But the man, woman, kid, unicorn who shows up with a battleforce and has a an equal chance against any codex is true balance. At small point levels these fun lists can become more viable. With only haveing 2 or 3 lascannons you cant just alpha strike me.

Are there some lists that preform better than others at this level? Of course there are. Yet there are a lot more and the gap between lists is thinner and a non competitive list can have atleast a better shot at winning.

"oh how rich we are". Are we not addicted to the rich life of enough points to field 2 Land Raiders full of TH/SS Terminators as well as Razorspam. That if we lose one lascannon or meltagun, who cares! We still have a dozen left. That if I lose the dice roll to go first I might as well pack up my models and go home. Did we not put hundreds of dollars and hours into our armies? Did we not shed blood sweat and tears for them? Did we not? Do we not want to see them play a fun competitive game all across every aspect of the game? Is not that why we play 40k?

Now what I want you to do is to play a game at 1500 or 1250. Forget spamming anything and take whats fun. Get a friend to do the same. Play a game and then come tell me that you did not have more fun than a 2500 point game getting tabled by Razorwolf. Heck get a group together and play a mini interclub tournament. Say it wasn't fun and a lot more exciting and dramatic.

This is just my oppinion on the subject, I do respect people that like the larger point levels. I am not saying we should leave the high levels in the dust. They can be fun, and have thier place. I do not want to start an arguement either. Yet I can play at your level, now try out my level?