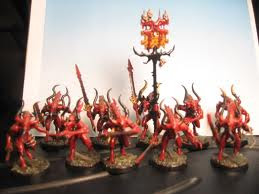 Hey all, I was just sitting around thinking of a totally silly list to run as part of an apocokypse game and I came up with this. Its ment to be a lesser daemon spam list but it grew into an all spectrum daemon spam CSM list. So here it is....


Now my original thought to this army was to try and get 100 lesser daemons in a list. Yet at 1300 points that left me with little for marks/hq's/GD's etc... So I downstepped to 65 daemons in 4 groups with two at 20, one at 15, and one at 10. Now these arent codex daemon daemons, they are basically a non power armored, fearless, 5+ invul save assault marine. Thats 60 attcks off the charge on the 20 daemon units, off of a non scatter deepstrike. That is 195 attacks possibly turn 2 at S4 WS 4. This is just completely silly when you think about it.

Holes in the list include a lack of anti tank. A winged Tzeentch prince with wings and 2 oblits can do very little. The 3 GD's can help in this catagory. Only 5 icons can cause a problem, Try and use a sorcerer with icon instead of the prince if this is a real big problem. Don't try and win a tournament with this, but try it for fun... It's kind of ridiculous anyway....9 scoring units is a plus although, and each 20 daemon block is pretty hard to kil with invul and cover saves. Also if you assault a RB that hasnt moved with a 20 daemon block more than likely you can glance it to death and probably even wreck it. With it surrounded it can even block emergancy disembarking.... =)

Tactics include hiding your rhinos till the units come in then have the daemons come down with units intermingled so they give each other cover saves. then just swarm... It can be a very silly yet crazy enough to work sight....