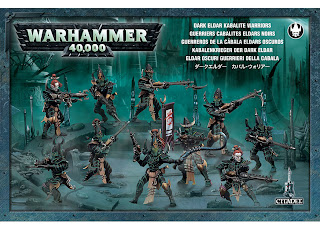 Ok so today I’m gonna talk about the Dark Eldar Warrior models since I just got done building the first squad.

First of all I picked these up at discount for $22.50 at Vets Gaming in Warwick, RI. If you live in or near Rhode Island its one of two gaming stores in the state and it’s the best one I have ever been at. So go check it out at a tournament they host. (Next one is on Dec 11th? I believe). This is a steal for the quality and quantity you get in this box. It comes with all of the weapon options and a half a dozen extra heads. Also numerous extra splinter rifles.
The quality of the models is the best I’ve ever seen done on plastic yet, this is a hobby painters wet dream of an army. My old gripe with DE was that their models looked pretty stupid with silly poses and way too spikey. the models looked pretty cartoony as well. These models look more like Craftworld Eldar, which is the next army I did want to start, except a lot more evil. These models are very cool. Defiantly a painters army.
Do I have any gripes with the kit? Well if you accidentally match the wrong two halves of the legs your going to get messed up since some of them fit together but others don’t as well. So watch out for that. Also the arms can be hard to position since you have to slide it under the shoulder pad. A trick for these models is to let the legs and torso dry up. Then flip the model over and glue in the gun arm first. It helps to place when the model is upside down. Then place the other arm followed by the head. Other than that these models slide right into place perfectly. The heads are very Craftworld Eldar-esque and I like them a lot. The helmets are probably my favorite feature on these guys.
I am going to go with a black armor highlighted with blue. Any clothe or sails more than likely will be grey. White being mixed in around there with some metal pieces being boltgun metal. I have yet to do a blue and black army and it is something new to do. These models will be very awesome for a mostly highlighted paint scheme. There is a reason GDubs made the book full of all black models highlighted with every color in the rainbow.

more on this later....The Dark Eldar are seemingly worth the wait, GDubs didn't screw up on these guys...
Posted by Kevinmcd28 at 1:53 PM