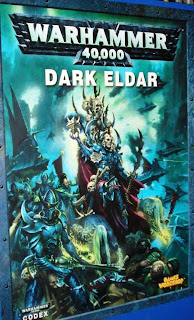 These are from TastyTastes excellent coverage on Blood of Kittens network of the Adepticon 40k Championships...The following comments were made about how DE did not make the top 4 tables yet Nids and Orks did..... here are the quotes....

"... Totally unsuprised about the poor showing for the Dark Eldar….as much as people seem to like that Codex, the whole army is made of paper, and I just don’t see the ‘competitive’ in it"

" Shame, would have hoped to see some kinda DE presence in top comp by now, I can get them to win but the lack of hammer coupled with copious glass would indicate they made a not so great army which the following book just laughed allover in every possible way….it is suprising to see nids and orks up there, well done chaps! "

"Like a lot of other people, I think the DE codex IS fun, and well-written….
Unfortunately, it’s an army of strength 3, toughness 3 dudes, without the Imperial Guard benefit of Armor or Large Template weapons, outside of the two flyers- which are laughable when compared to Vendettas, Valkyries and Stormravens, price-wise, armor-wise and weapons-wise.
And as amusing as ‘Power from Pain’ is, those tokens don’t really help units that have 2 survivors left….

I’m a big fan of ‘underdog’ armies, and I’ll ALWAYS be a Xenos player, so I almost started a DE force to go with my Tau and ‘Nids.
After spending some time with the Codex and Army Builder, I decided against it. Nothing I could make from that Codex would stand up against Netlists from any 5th edition book, including my ‘Nids.
I have yet to lose with my ‘Nids against a DE force, regardless of the poison weapons…the army is just made of paper, and running away and shooting doesn’t win games…"

I hope to prove these two players wrong but respect thier current oppinions, they need a reason to think otherwise....more on this in a week at the colonial...back to painting (que musix)