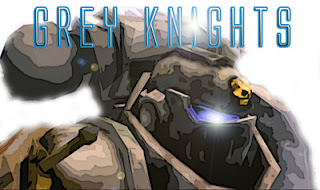 Ok GK have been out for a little while now and they are proving to be a lot better than I originally believed. Goatboay with a Crowe/Psyfleman Dread list came in 2nd in the Alamo GT. So they have proven thier mettle (BTW a Dark Eldar player, the infamous DashofPepper of dakka dakka infamy, won that tournament...proving DE are viable tournament contenders if played correctly)...The internet is split on the core of the competitive GK army...which is a crowe based rhino list or a general psyback spam list......Psyfleman dreads continue to prove thier dominance as always an excellent choice for HS....now as I usually am I believe a compromise will win the day and throw out the best possible list...now I am not saying a Crowe based Psyback army yet a mix of full rhino squads and a decent ammount of Psyback support. I see the problems in the psyback list as a lack of viable assault prowess....5 man strike squads are pretty squishy when faced with a decent assault unit...so on to the list...

First of all we need a good HQ choice...Grand Masters themselves are good but too pricy for our needs...so we shall go to the swiss army knife of the book by using a Librarian....This Libby will be by himself to be a mostly Psyker/psychic defense option by throwing up stealth/cover as well as some nice other psycker abilities....

Next we need the meat....how about four strike squads wuth a psycannon and MChammer each in a psyback.....a relativley good cheap unit in a codex full of expensive options....

Now for elites I am at a stand off....I want some Purifiers for thier assault ability as full squads in rhinos yet I need something to kill land Raiders....venerable dreads with multi-meltas are a nice addition to a mid-range shooty army and will take a lot of shots away from the Psyfleman dreads...so two of the dreads and one of the purifier squads...lets look at this puppy....