In Defense of the indie GT, You should try it out! 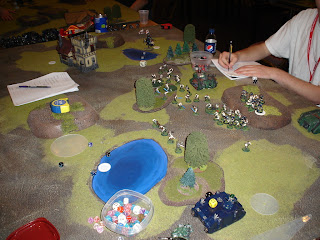 I know many people are starting to hate on 5th edition.....thanks Grey Knights for being the next real competitive bandwagon.....a few years ago everyone liked it....It was the Dawn of War edition which saw other outlets getting a ton of people into the hobby....our community tripled in size and an online community formed....including all of its egos...and its a good thing ....even if you do not buy into the whole 40k internet celebrity blogger thing...like who cares?

What is this online blogoshpere anyway? In truth I found it is just plain fun for both sides of the aisle...and it gets a lot of good content from some very nice guys online. We also saw a boom in the quantity and quality of indie GT's in 5th. If you ever bothered to go to them they are not all that bad.....Contrary to popular belief about 66% of the players there are not really competitive and just play there for 5-9 great games with beer and buddies. Also contrary to what the internet says all of the netlists you read maybe make up 20% of the actual competition. Outside of the Nova I doubt you will find more that 20% of any army list being represented...even GK...some of which are fluffy/fun lists. I have never been to a GT where I played an army mroe than twice and have only ever played a GK player once in a tournament...and he was happy drunk with free beer =] Lastly we all fear the waac....or becoming one....I looked a little down that road and ran away fearfully after taking one step on it. If anything is true about 5th edition GT's is that the guys that do go to multiple ones a year are all extremely talented and smart players that could win with almost any list given to them....want to know the best part? They are the nicest and friendliest gamers around and everyone is friends. Yes its a thing...of all the competitive players almsot aall of them like each other and drink beers at the end of the day.....you do get two or three waac offs at every event but they get booed and hissed off of the field anyway and usually drop out after they get tabled round 1. You also meet some guys you do not mesh with...heck I have bumped a few elbows ?I wish I hadn't in the past with some of those guys but regardless everyone still manages to get along. Yet when you do face, in first names only (for reasons we all know) I will mention a few..... james, simon, bill, ted, chris, other chris, famous chris, hanz, other bill, thomas, etc...you will laugh and have a good time...probably get your butt kicked while having fun...and learn A TON about how to be better at the game as these guys play the game like a chess match and can usually tell you what you will do before you even know it (I swear simon has mind reading powers still)...If you atend any decent GT in the northeast you will meet the guys stated above and learn why I find them all cool dudesmen....

It is a game of characters and people do need to realize none of the really really REALLY good players you can probably find on rankingsHQ (btw nobody on that cool nifty top 20 list in america that I know takes it seriously or atleast more than fun between friends) even goes for the prize anymore....they win a lot of events and have huge collections of loot that the game pays for itself eventually....heck I stopped spending awhile ago and a couple tournaments later I have a pile of boxes on my shelf staring at me looking to get used. They come for good games and fun times. I have YET to meet a player that I have seen online that turned out to be a jerk or a tool in the game that was not already jerked around with at first. You know it is kind of cool a few GT's and a year later to learn of something even beyond the online community, yet that you can travel hours to an obscure place and run into some good ole boys you know who toss you a beer and argue in a friendly way over a rule or scenerio. God damn GT"s are so much fun.

So my advice to those worried that a GT will just suck and you will have no fun.....as long as you are not undefeated going into round 4 or are in the top bracket of the nova inventational the guy acorss from you will probably be smiling and you can throw dice down together. Going to a GT now? Well toss it out online and in general any blogger you post on will probably meet you there and toss a few back with you. It is cool to put names to faces of people you read about while meandering through everyones mind machines they post online..sometimes you find out they are different tor all the same....or that whent hey get drunk they curse a lot and fall asleep in the parking lot passed out drunk in the backseat of another guys car (you know who you are) or drunkenly interview the TO during open gaming the night before (every year...I am guilty)...Give it a shot....$60...a hotel and a weekend with all painted minis on terrain filled fields int he same building you sleep and drink in are all pretty sweet. So give it a shot!
Posted by Kevinmcd28 at 11:00 PM