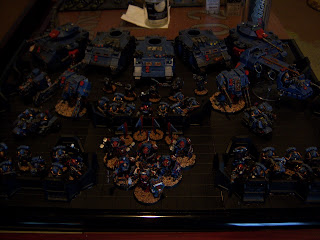 (2011 Colonial GT Space Marine List, sorry I forget whose it was, but a very nice army here)﻿
Hey all, continueing my current theme of Codex: Space Marines and the last couple months of 5th I know there are a few diehard Codex Vanilla fans looking to go to a tournament as a last hoorah of 5th edition.

Well today I will talk about three lists that stand the test of time of tournament dark horse winners at the 1750 level. So first off I will start with a list not often seen but talked about somewhat, which is the Pedro Kantor, honor guard and sternguard list....

Ok simple concept list, 4 decent scoring units is nice, run up the honor guard and pedro and jump on something as they are effective like terminators.....a fairly fun list. lots of melta and fairly killy....forgivable....would have issues with missile or lascannon spam....I have heard wonders done with even larger units of honor guard with pedro....Probably wouldnt win you a GT but could really mess up some RTT sites.....Also if you do not like using honor guard having a third unit of sternguard and throw in lysander with bolter drill for some fun....that version also works fairly well.

Next up we have my current favorite list of the bunch which is a shrike based list...now the more conventional Shrike lists differ from mine by being almost all scouts.....some players even use vangaurd or regular assault marines with shrike but more often then not assault terminators would be the better solution...

A very one trick pony list used more commonly in the south from what I hear. It does one thing and one thing well.....Effectively you infiltrate the scouts, shrike and his termies and use scout moves on the scouts while the sniper/missile pairs sit back and shoot stuff. Turn one you multi assault a ton of stuff with scouts while the termies get ready (also why you would want vanguard or regular assault marines so shrike could assault too)...attack bikes cause hell, drop pod dreadnought kills stuff....basically it relies on the game not being KP's and winning first turn....lose first turn? youll probably get rofl stomped. Its another fun quirky list that can cause hell in an RTT but probably not win a GT...but getting a first turn assault with fleeting scouts is always fun...and fleeting assault terminators.

Now finally we will talk about the most common, and most competitive build which is a Vulkan based list....Now a lot of players would use him in aMech list but I am gonna take a note from the book of some very good players and do a drop pod dreadnought version.

This list can cause some serious havoc with a lot of twin linked flamers and melta....Ive seen i used all too well....locator beacons help the first wave while the second wave comes down and causes terror.....I, as well as many others, have been a victim of this list.....drop pod dreadnoughts has always been a feared list but near the clsoe and with the current meta it has only gotten better....
Posted by Kevinmcd28 at 2:58 PM