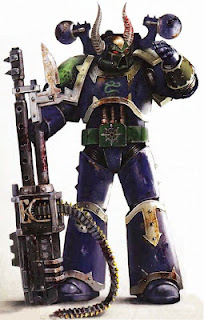 Alright guys first of all GW why give us a Daemons trailer when we all want our power armored companions to get the update....haha

Anyway so Tastey gave us a great rumor dump on the new Chaos Marines book....and hey I do have a World Eaters army that only got bad from the edition change....

With Nerfs to FC and the general high cost for them khorne berserkers in the old book got bad. I had to assume they would get rage, as it only makes sense, and a points drop in the new book. The newest rumor batch confirms my insight....Also that lords can unlock different units as troops also makes sense. So running my khorne berserker army would work if its viable but unless chainaxes get a good AP value instead of that crap AP- they gave chainswords....but they probably will not. So lets hope they make the unit cost  around18 points a model so I can take my 8 'serker's squad with an icon and a fist for around 175 points please and thank you.

So the apparent chart with 60+ random abilities? haha Phil Kelly must have had some sleepless nights. Am I mad about the randomness? No you just do not plan for anything on the chart but just see them as a bonus just like the warlord trait.

Rumored changes to defilers/daemon engines and the flyer? Hell yeah a 5+ invulnerable save for my defiler that would be very cool and I would be happy. In general if that follows through with all daemonically possessed vehicles we could see daemonic possession as a must take (free smoke u can shoot through every turn and not lose the save? thanks you Phil). Although I really hoped the daemon engines would be more like the ones made by forge world which are insanely broken in the game and they look extremely cool (fingers crossed they turn out to be like the forgeworld ones)

As for the flyer? the fact that we get the ability to shoot down other flyers helps out if we see a huge presence of flyer's in the game. I do hope it is a flyer that has dragon details on it and not an actual dragon as that would be silly.

Warp Smiths and Dark Apostles have long been wanted in the book, they probably will not be seen as both of them have a description that I do not see that useful outside of a cultist spam list and a word bearers fluff army.....but they are cool and as a Chaos player I am happy to see them included.

I already started converted and painting my guard as zombies so I am happy to see more confirmation....hordes of FNP, fearless models that cause fear sound good to me....I would be happy to see these guys at the just over conscript cost they are described as. Consrcipts in the guard codex cost 120 points for 30 ...so I would hope to get these guys for 140-150 points for the 30.....Nurgle armies sound like they will be popular....especially with death guard getting cheaper, and having poisoned weapons....so hello rerolls to wound against other players with T4 and lower.

In general I would also be shocked if they didn't include a fortification kit for chaos as well as an update to their phsycic discipline. So how do my dark grey undead zombie chaos army that I am building seems like it will be good.....more on this later....