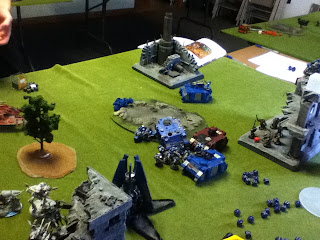 So the game was the new version of kill points (purge the alien?) and the set up was hammer and anvil (FB Battle of the Pass fyi). All of the tables had four ruins, a crater and a small forest. So very ruin heavy terrain actually favors me with my thunderfire cannon's techmarine able to bolster ruins. so I put the thunderfire cannon on the third and top floor of a ruin in my half as well as Ezekiel and his Dark Angel buddies. I boxed up my razorbacks and rhino behind the crater next to my ruins. He set up his seer council in a ruin on the opposite corner of my thunderfire cannon, his war walkers in another uin parallel with it w/ his rangers on top. He also hid his vehicles behind each ruin and his jetbikes were in reserve. I rolled to go first w/ a useless warlord trait while he rolled the stealth in ruins as well as MTC in ruins Warlord trait (the perfect roll for this entire tournament being mostly ruins)
I dropped in with my Pod sternguard and nuked his war walkers. I wrecked two of them via HP's (thank you four glances) and took the scatter laser and a HP off the last. Effectively neutering the war walker threat I fired my thunderfire cannon at his council in the other set of ruins putting 16 wounds on the group total (a lot of hits and they were bunched). He then proceeded to fail six saves taking out half of the council and putting wounds on the farseer and autarch (ouch). Then on out saw me slowly piece mealing his Amy and the game ended with just his vehicles left on the table. Only a 9-7 victory to myself due to all my vehicles being picked off but I had too large of an early lead for any realistic come back all game. I won kill the warlord and line breaking as well.
Next game I would match up against Andrew from the club. Probably my hardest competition I expected to, and did, face all tournament as I had lost to him the previous day when I played two practice games against him and another club member (I won the game against Damon and his necrons although). He runs a Templar's list w/ Reclusiarch in artificer armor as well as the mandatory Emp. Champ. 6x crusader squads (2x5 in pods w/ a plasma gun and 2x5 in the back one w/ a lascannon and another w/ a missile launcher). the 5th squad has a bunch of neophytes as well as the two HQ choices and the 6th is in a rhino. He also has 5x termies in a pod w/ 2 assault cannons as well as 2x typhoons. The game was diagonal deployment and the new version of capture and control. Andre had a draw the previous round and I knew as long as I drew him in this easy draw round I would be ahead playing a tau/ DA force in the final round for the win. So I castled in a ruin w/ my objective near the top. I held a single attack bike and the DA squad in a razorback in reserve. 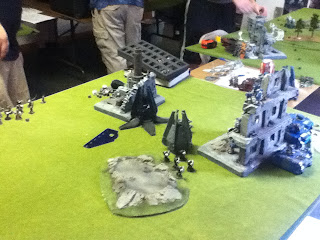 As you can tell from the picture he dropped the two crusader pods in front of my castle and started steaming forward in his rhino and rushing forward w/ the foot squad. this was a great move on his part as it made me deal with the pod squads. It took my forces awhile since I tried to hide a sternguard squad in the back to counter the termie pod when it came in (a mistake) as I did not have enough shooting to kill 10 freaking marines. (ugh). By the time I got rid of the pod squads he got his rhino up there which I systematically nuked and then thunderfired and shot to death the entire contents. By this time he got his last squad with the characters on the edge of my castle as well as the termies. I moved forward my sternguard and killed his termies easily but my other squads had taken so much damage, Ezekiel had died from shooting wounds and Pedro had one wound left. So it came down to his two HQ units contesting my objective while he held his with about 7 guys left. He had one wound left on his reclusiarch too. Those 2+ saves really hurt me. So the game ended in a close 5-2 loss for me. I really should have kept both sternguard in good shooting positions or dropped my pod with the guys and made a more serious move on his objective drawing away his real force from my objective back to his...yet it was a good game. (Andrew would go on to win the tournament 2-0-1). I won first blood and line breaking although
So in the last game I played Zak and his Tau army with Dark Angel allies. He has a Commander, 2x crisis suits, 2x broadsides, 2x10 fire warriors, a hammerhead, a 10 man dark angel unit w/ a fist and plasma cannon (combat squaded one in a rhino and one on foot). a vindicator, a 10 man assault squad w/ a fist also combat squaded, and a chaplain. The game was dawn of war (previously pitched battle) and the normal objectives mission in which we rolled four objectives (2 in each of our lines). I put my thunderfire cannon in a bolstered ruin, center of table, on the top floor w/ 2x5 man tac squads hiding behind it out of LOS. I put Ezekiel with his boys in thier razorback on the left side with a attack bike and the lascannon razorback hiding behind it while my sternguard in a rhino and an empty HB razorback as well as an attack bike on my right side of the ruin. He put all of his tau in a ruin on my far right except for a squad on the top floor with an objective in the middle. The rest of his marines between the two ruins. I dropped in my sternguard and shot his crisis suits causing them to run off the table as well as my thunderfire cannon got 21 hits on his fire warriors on the objective killing 7 and making them run off the table. I moved all y vehicles forward and picked off a few more models. 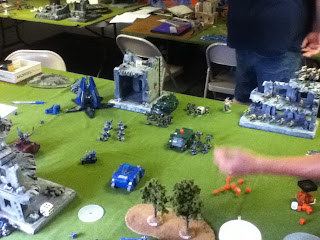 Eventually my sternguard moved conservatively hiding behind the middle ruin on his side with Pedro while Ezekiel and his unit slowly ran froward into his side. My attack bikes both managed to assault his vindicator actually killing it through 3 eventual krak grenades and not MM's (face palm). He blew up my sternguard rhino and assaulted the sternugard in which I killed three of his assault squad but killed the 3rd plasma gun guy of the day from my own shooting due to gets hot with an overwatch (double face palm). then combat lasted until all of my sternguard died and Ezekiel ran in and smacked his assault squad. 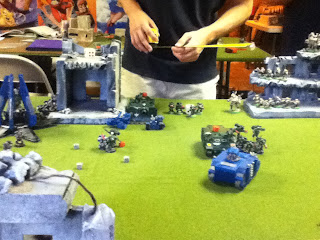 ﻿Eventually Ezekiel and Pedro, by themselves, ran through his entire army pretty much by themselves, with thunderfire cannon support. He actually got three tactical marines and 3 assault squad marines all the way across the table and killed my own tactical marines while I could not manage to kill these tactical marines grabbing my own objective I thought secure (triple face palm). Yet I had already tabled him but these three guys and a hammerhead still alive holding his two objectives and all three secondary objectives so I had a 9-3  solid win. Since I knew I was going to sweep his side with two troop choices intact I could ignore my own objectives w/ his small move at them.
So all in all a 2nd place finish with a 2-1 record. I was happy with the performance and the list worked great. I would like more sternguard as when they start to lose models the army just becomes nerfed and without a great counter assault (don't get me wrong Pedro giving  +1 attacks to my entire army andthe sternguard four attacks each on the charge and Ezekiel 6 is a great assault threat) but I couldn't deal with simple HQ choices from Black Templar's....still everything else worked fine but the razorbacks are proving more useless as they did almost nothing but give up victory points and miss with their shots....so a great tournament and a nice 2nd place finish.....Ezekiel with divination was very useful and I couldn't say the extra troop from them was not useful. The thunderfire cannon won back his points on each games first shot. A very solid model that won all of my games for me. I will be running two of these every game from now on a very solid choice for an undercosted 100 points.
thanks for reading, please subscribe to my channel on the right side of the page
Posted by Kevinmcd28 at 11:45 PM