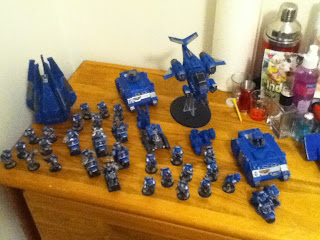 Hey all, just mulling through my options for the 40k league about to start in my FLGS. Sounds like a lot of fun and weekly games of 1500 point 40k 6th is right down my alley. Also since I highly doubt Chaos Space Marines or Dark Angels will be out or allowed by the time the Battle For Salvation happens so I plan on playing Normal Marines with Dark Angel allies, just for Ezekiel, like I have been until October. I am getting a limited edition box set as well as another set of dark angels from another box to fill out that army for when their book drop. So lets go over what I plan on bringing at 1500

So the biker command squad has done me only wonders in this edition. They almost always get their FNP rolls as well as the fact that the captain cannot be insta-gibbed by a missile launcher or lascannon anymore. They are a lot more survivable and the 2+ save captain in the front soaking wounds until he passes them off. MM attack bikes also cannot be insta-gibbed anymore and without many vehicles being played the few MM and all the plasma tends to do fine against vehicles. I have actually found the Storm Talon a decent choice since only about half the lists I see have either flyer's or anti flyer's so it tends to work out fine. pod sternguard are excellent and thunderfire cannons have been excellent. So an excellent list from all of my experience with its components, I would like to add in some dark angel librarians, like Ezekiel, for divination especially for my BFS list as well as more sternguard or some heavy choices. So more on this later