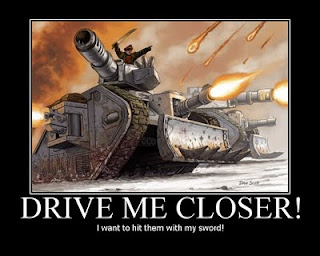 So 6th edition has made certain support vehicles a lot more viable. I will say Leman Russ' were good last edition as well but really did fall short of the manticore, hydra and two flyer options and frankly they do still yet as a heavy ally certain lists can benefit from the AV14 beast of the IG book. I personally use to use 3 Russ' in the beginning of 5th and at the least used one in every iteration of my IG blob guard list. So I will be going down through the fairly long list of Imperial Guard Leman Russ variants and how useful they can be in this edition.

So first up the general rules and upgrades of the Leman Russ. the standard Leman Russ BT and it's equivalents have AV 14/13/10 while the Demolisher and it's equivalents have AV 14/13/11. I will note those tanks with rear armor in this article as Heavy Leman Russ' compared to the standards. They also come with a hull mounted heavy bolter, a searchlight, smoke launchers, and the lumbering behemoth special rule which states it can shoot all of its weapons, although the main cannon is an ordinance, while moving 6" yet needs to roll to move up to 12". You can add on a hull mounted heavy flamer or lascannon. You can also take sponsons with multi meltas, heavy bolters or even plasma cannons. These things can be mobile gun platforms for a premium. It can also add the standard array of IG tank upgrades including camo netting which lets the vehicle benefit from +1 to their cover save. With cover being determined by what is giving the model cover in this edition. In my list I run thunderifre cannons with IG allies so if I bolster a ruin and get cover on a camo netted vehicle behind it hello 2+ cover save on my vehicle. It has three hull points and Also Pask can be taken with these tanks as a nice little upgrade. So to the variants...


1. Leman Russ Battle Tank
OK the work horse of the Imperial Guard Itself. comes standard with a Battle cannon (Ordinance 72" S8 AP3 Large Blast). A standard Leman Russ with a rear armor of 10 this thing is not that bad for 150 points base. Although the cannon benefits when trying to kill vehicles these days since the hole does not need to be over the vehicle to get full strength anymore it is only AP3 and S8 so not much of a vehicle killer. Power armor killing is great, especially at 72" range but I have had terminators just walk right on through these guys with their 2+ save....something more than likely that will be common these days....

2. Leman Russ Exterminator
Now not something that I would have taken in the past but it is now technically better at killing light vehicles than the standard LRBT. It comes with a 4 shot S7 Ap4 Twin linked gun....so for 150 points nothing more than a rhino killer.....not very useful and I have only heard of one player ever using one.

3. Leman Russ Vanquisher
The apparent "vehicle killer variant" with its long 72" range Heavy 1 shot yet I stress is still only AP2 and S8....so still not a very useful pattern overall with HP's making more of a difference than actual damage chart rolls below AP1 in my opinion. Also it is 155 points so like the exterminator too expensive for not that effective of a variant.

4. Leman Russ Eradicator
This 160 point variant packs a S6 Ap4 Large blast weapon that ignores cover. Now I cannot say that is not a useful gun but only if your local meta is purely IG and Xenos players. If your area packs power armor this guy is not that useful but if your play group is a genestealer cult go ahead it will work great at squishing bugs.

5. Leman Russ Demolisher
The first heavy variant with AV11 rear armor which is immensely useful. At a 165 point premium you get the fast cousin to the vindicator with its S10 Ap2 Large blast 24 inch range gun. An awesome weapon yet it needs to be danger close to be used. I have one and have used it in the past yet artillery with similar shots cost cheaper and work better than this guy...too expensive for the job.

6. Leman Russ Punisher
Now this is my personal favorite variant. For an expensive 180 point vehicle we get a 24 inch range S5 AP- Heavy 20 gun....now only being AP- is a slight disadvantage yet with Pask in this vehicle that many hits and wounds can vaporize most units. I am a fan of this tank using it with Pask, camo netting and plasma cannon sponsons for a premium of 290 points. This vehicle can eliminate most units in range yet it is a short threat range....it is a niche vehicle although

7.Leman Russ Executioner
By far the most popular variant by a long shot at 190 points this gun is a S7 Ap2 Heavy blast 3....so effectively a 3 shot plasma cannon that does not get hot (since vehicles can get hot these days). This with plasma cannon sponsons can lay down 5 plasma cannon blasts....a highly effective option I tend to see a lot as a support vehicle.

All in all these mobile gun bunkers are fairly durable and can lay down a lot of fire power. Although not as awesome as some artillery units, or Valkyries/Vendettas a nice option to be taken...

thanks for reading and please subscribe for a possible future give away. Thanks!
Posted by Kevinmcd28 at 8:08 PM