Is it the Dawn of Abbadon Wing? 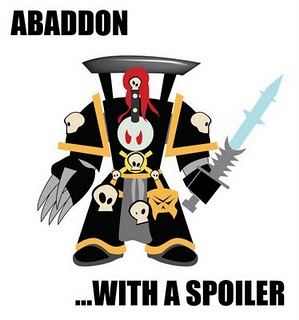 Hey all, it has been awhile since I have talked about Chaos Space Marine rumors in detail but recently we have been given enough information to have a good look at what the codex is going to look like. Overall it looks like a decent codex almost reminiscent of the change from Daemonhunters to Grey Knights. The recent rumor of Abbadon unlocking chosen as troops as well as allowing chosen to be upgraded into 2 wound terminators. Effectively Chaos paladins. Now I own a dozen chaos terminators that have been sitting around. Is this the dawn of a Paladin styled chaos army? It seems probable. But how would an army look like in this form.

Well marks and icons will be crucial to a proper terminator list in the paladin style. The choice between Tzeentch marks in order to upgrade your invulnerable save is important as well as how scary would T5 nurgle paladins be? This does not even include icons which are also apperently open for taking with makrs so FNP might be available as well. A lot of the OOP models also have power axes or mauls (ugh) so customising the power weapon sets is very viable. and with twin linked bolters able to become combi plasmas makes the unit very diverse. 2+ saves makes overheating with a lot of combi plasma weapons not a big deal. Especially with two wounds. Also powerfists and chainfists are available. Also Dark apostles adjusting USR's in a unit may make customized "chaos paladins" an interesting unit choice.


In general to help out in numbers cheap 120 point units of 30 man chaos cultist blobs sound very good to me. Also vindicators that heal themselves and your typical use of oblits.

In general the idea of a list like this intrigues me since they effectively could do paladins except with cheap other troop choices to help in games.....any thoughts?
Posted by Kevinmcd28 at 6:10 PM