Editorial: The Politics of Tournament Design: The Great Book Purist vs. Non-Purist Debate! 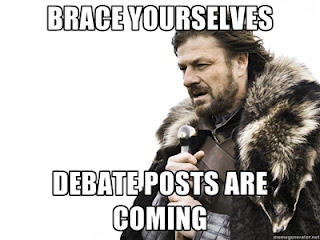 The purists, who tend to be strongly opposed to using anything but the rules in the Big Green Book (As I call it) and who will only use missions as seen in the book the way Games Workshop has designed the game to be played. Purists tend to be more of the fluff players as well as some very influental bloggers, for example our great rumor seer Naftka at Faeits, all wishing to play "real 40k the way it was ment to be played". The Non-purists, aka the 5.5 crowd as the purists will call them, will use older "more proven" mission formats such as table quarters and will leave out certain, more random elements such as warlord traits, secondary objectives, book missions, terrain placement and fortifications. Most Non-purists are the more competitive players as well as the Major Grand Tournament Organizers. Now I will say myself I tend to be a moderate. I don't mind the Nova format or tournaments using what they wish from the book but I do have an opinion that the book should be used as is and a hybrid compromise, such as I wrote out a couple weeks ago in the perfect tournament format article I wrote, should be used. Such as the Bay Area Open format which is more book purist but still has a competitive element.

Might it be the fear of changing from a proven method to come more into line with the times that drives the current player base to lean towards older mission formats or is it necessary to keep the competitive scene itself competitive? Such old missions like quarters are just not that feasible in an edition where every model cannot score in a quarter, for instance NOVA not allowing vehicles to score quarters. This, although is more purist, is a non-purist solution that causes a large unbalance and as we can see it defined this years NOVA Open. Although certain book missions, such as the scouring, emperors will and the relic, are tough to use in a balanced environment the use of three missions all at once does balance out some of the more unbalanced qualities by diluting their worth with other missions in play. So we can use the book missions as long as they are combined to dilute the unbalance and create an innovative and tactically thought provoking tournament mission. This is a concept of the non-purists that can be used as a compromise with the purists. The BOA, as a good example, does this.

Well realistically the bay area open uses all book missions, and deployments, and secondary objectives. They just slightly modify it so that three are always in play and whoever wins the most of the three wins. Ia this such a hard pill to swallow for purists? As some book missions played by themselves with everything including random terrain placement can make the game fairly unbalanced. Now I am not talking about mysterious objectives or terrain as I am for use of both of them but in general TO pre-set terrain  makes the game more balanced and makes tournaments more fluid. With terrain density placement I have seen some wonky boards such as a Tau player playing a BT player where the BT player specifically set it up so that all the terrain was touching the middle blocks and blocking LOS so that he could get close without the Tau player having a chance to shoot him. Now they would state this is part of the game and its strategy but trying to do this every game of a tournament would cause TO's to need double their current stock of terrain and places to put the excess when it is not used. This would damage terrain as it is placed under the table or lost on another table. Chaotic ehh? This is a good argument not to use something directly from the book. Now the Non-purists are not saying every game should have pre-set terrain yet for tournaments it makes more sense.

Now comes Warlord Traits. With every codex until this weekend being a product of 5th edition none of them have their own personal warlord traits. So they have to use book ones which are not designed to be neutral so many are not worth it. So someone rolling acute senses for an army with no outflankers is at a disadvantage to an army that rolled stealth in ruins when they already have many ruins to hide in and techmarines to bolster them further. One great solution being used by the BFS is to roll once and choose the chart that you want to use when comparing the number to the three charts. This still uses the Traits charts but makes it more likely that you will roll something useful. although a Non-purist solution some purists are still opposed to this because it is not how the book outlines it.

The last big issue is fortifications. Now Non-purist TO's tend to ban the larger pieces such as the sky shield and the Fortress of Redemption since they use pre-set terrain and these pieces just will not fit legally on the board. Now from my viewpoint I think that the fortifications are not all that large and can fit on your typical tournament board so I disagree with the Non-purists by banning them. Purists believe they are part of the game and that if TO's wish to use them but cannot due to their terrain layout they should just use Terrain density like in the book. A good point.

. Purists proclaim that the non-purists are not giving the book a chance to prove that it needs to be changed yet the non-purist TO's need to make sure that everyone at their tournament is happy and that if Joe Schmo shows up and game 1's scenario is lopsided against him he will be pissed about the couple hundred dollars and vacation days he spent on your tournament he had no chance in. It is a thin line to walk but it is needed. Yet truth be told as we get further into the edition we will meld, with the tournaments, more into 6th edition and these issues will more than likely start to disappear with the new Chaos book as things start to be updated. We just need time. Until then Non-purists will state if you do not like their format just do not come and purists can stay at the game shop playing pick up games or regular RTT's. We all must endure the growing pains and find compromise....more on this later.
Posted by Kevinmcd28 at 1:32 PM