The Road to Templecon, and other events along the way 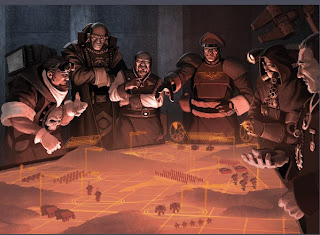 Hey all, so this is starting to look like a cool month for 40k. First up on the block is Dark Angels coming out this Friday  now I am still holding out that like the chaos codex somehow it will magically appear online a little early since I personally cant wait till Christmas but we never know.

BTW I have my Vamps up on ebay still, just a few hours left its a good deal so make me a happy camper and have the ability to uy some Dark Angel stuff and place a bid here it will be over by 4(ish)pm EST

Now I wanted to bring my Guardians of the Covenant Army of Dark Angels to TempleCon coming up in a month but unfortunately it looks like they are not going to be allowed. So after some grumblings of half finished armies all over my work bench and some musings over the recent Battleground Invitational giving a good insight into the overall regional meta going into TempleCon's Onslaught GT and my general "Pinky and the Brain list building process" (always trying to take over the world [meta] but failing) I am trying to bring something that will be a scissors to everyone else bringing paper since they are preparing for rock....if you follow my logic pattern. So I am going with my Storm Warden Vanilla Marines with Ulthwe Eldar allies. Now I will not divulge all of my list but I did get Guppy, my storm talon, a little brother talon who will be named The Petite Avenger. I also plan on running Eldrad as he is great for psychic defense as well as if you play it RAW he can doom two enemy units a turn and my Space Marine Main detachment can benefit from the re-roll to wounds. Now It does say for the power "Any failed wounds on an unit that has been doomed must be re-rolled" and makes no mention that they must be from the eldar player like every other power. Also the FAQ did not mention this at all unlike the other powers. I assume it works like every other malediction and is an effect caused on an enemy unlike like blessings which effect your own models. Also for the eldar a guardian blob is always a nice piece of scoring torrential bolter equivalent firepower. Other than that libies and marines for firepower. The main pieces and details of the list I will keep under wraps for now. I started painting my Ulthwe black guardians and I like the look of them. Very menacing and I like the black, bone and red accents going with my sharp blue and silver marines. A good contrast. I am painting the Petite Avenger himself to be in deathwatch Storm Wardens colors as well to be fluffy (can baby storm ravens be in the deathwatch?)

The meta for TempleCon looks interesting. A lot of anti-daemon armies are appearing including Dark Eldar and necron horde armies. typical mix ins with chaos, IG blobs and GK armies. Should be interesting.

BTW I am also running a Meat Grinder Styled Mega Battle for Templecon, look here for full rules soon enough. I expect someone from here to show up to the battle and if so and you mention you read this blog and I do not personally already know you I'll buy you a beer (catch is you have to buy me one first haha)

Earlier today I found out in two weeks Battlegrounds itself is having a 500 point 5 round tournament. I am always intrigued by these small combat patrol tournaments and will be going. I am bringing my guard for this one with an infantry blob, veterans, hellhound and marbo. Maybe I can shake things up and win something since I haven't done better than 2nd or 3rd place, which I feel like I do a lot....or just completely flub an event, in 2 years now. Either way it should be fun

Also go check out the 11th company forum soon as we are trying to start a vassel 40k league. If your looking for a match up hit me up as i am usually mindlessly bored and need some 40k action even if it is with technology comparable to zork.

Maybe when this is all done I can finally paint up some new Guardian's Dark Angel models and play with that codex but until then hit me up at Templecon, it is my birthday then you know ;) more on this later
Posted by Kevinmcd28 at 11:36 PM