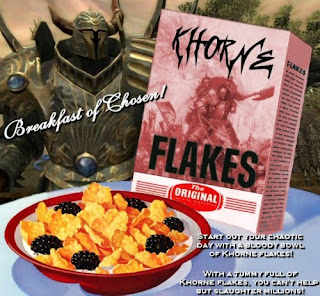 Why is this list winning? I just won a tournament and 9 games straight with it.

....granted FLGS tournaments aren't known for competition, but I have been tabling people's tournament lists.....

This list fits 3 List Catagories, Template spam, Khorne Berserker spam and Null Stun-lock. The Prince sits well with this list as well. Oblits and Defiler sit back and shoot up stuff. Rhinos/Raider rush and pop smoke, next turn they unleash the berserker love. Prince counters enemy MC's or rips apart transports. Since I ignore half of all possible damage chart results and have a cover save that first turn It can be very hard totear open those rhinos. Defiler guards an objective/counter charges assaulting enemy units. Daemons come down and support current zerker assaults then sit back and go to ground on objectives. Now I want first turn so the rush is easier, but I have had success with reserving everything and letting it all come on in pieces though this really only works well against Chaos Daemons and other assault armies.

The only game I have lost with this list was because my transports got halted and a C'tan got into my Berserkers. Not much I can do after that. Lucky pen rolls for my opponent killed me, but I do only have 3 transports to shoot at. I actually had the 2nd most mech army at my last tournament. There are a lot of horde armies up here.

All I can say is that those 3 catagories that my list falls into work. This is probably the only way to properly use a World Eaters army in this day of 5th edition. It has good synergy.

Please people give some thoughts on this. I expect to lose my next game, I have been getting way too lucky winning.