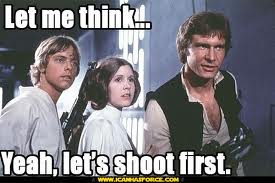 Hey all found myself a block of time to write something so I thouight I'd write a simple article on which order you shoot your weapons in. Pretty bland right? Not really as so many players always shoot thier weapons in the wrong order. Hopefully this article can help the less experienced players get a grip on the game.

Now of course anything said here can of course change depending on situation and army types. This order is more of a flexible rubber wall that you should try to stick to. Ok so into the order I use.

First of all is your Large Blast indirect weapons such as artillary and Orbital Bombardments. The reason you shoot these before any direct shot weapons or any other type of weapon is because these weapons can scatter, a lot. With such a small chance of hitting anything you want to hit it is better to leave the field full of bodies for it to scatter into. Plus these weapons are strong so having them hit anything is better than nothing, and they can be expensive sometimes.

The next weapons you should fire is your Regular Large Blast Weapons. The main reason is because they can still scatter but not as much as the prior. Other than the less scatter they fall under everything said about indirect weapons above. Most armies do not have many pie plates outside of guard anyway, so make sure you target something that not only you will kill but will have a major impact on your enemy. Such as a battlecannon taking out an entire 275 point unit of shrikes.

Obviously next falls the small blast templates. These can take advantage of any small gaps left by the large ones or any vehicles that have been popped by this point. But do to the randomness that is scatter these have to go before the direct shot weapons. It is better to have these weapons hit those three marines and cause a few wounds before your bolter fire took out those three models. Get my point?

Next (if possible) any dedicated melta or close range anti tank units should be shot. This way you do not waste a lascannon into it before the melta would've loved it.

Next you want to shoot your S7+ direct shot weapons. These being generally anti-tank weapons. This is where you pop mech and get those footsloggers out for some rapid fun. We saved these for after the large blast weapons because those large blast weapons could have scattered and killed the tank you just shot at and took out with the lascannon, successfully wasting your battlecannon or lascannon shot. I see this happen all the time. Templates (except flame) before directs is a rule of thumb players need to start dedicating to thier stradegy. Avoid tempation and lie down some pie pplate love before you shoot that dreads coffin off.

Next in order is actually flame templates. Flame the guys crawling from under that blown up rhino. You do this for the same reason you do not shoot direct before Blasts, more bodies to cover means more wounds you can cause.

Next comes Double tap love. This is where your friend the rapid fire weapon comes into play. I save these for last since this is when they can do the most damage by shredding up those RB squads up that your lascannon just put on the ground. So besides rapid fire all weapons should be fired as well that are left.

This is really a simple formula to follow and it will greatly increase the potency of your shooting phase. Avoid tempation and stick to the plan. Now I will admit some situations do pop up that require this order to be changed and in those cases go for it. Yet at all costs stick to this order if you are new. I can guarentee your play will be better.

More on this and more in the future...