Ill get to killpoints in a bit but first theres this....

Now reading a YTTH article (yeah I read stelek sometimes) He had the 5x5 Objective Mission being detailed on his blog. Simple 5 static objectives in which you could mix table quarters as well as VP's in as well. Here is the picture from his blog below. 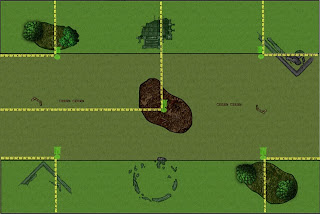 Simple Right? Good idea right? I like this a lot. Im gonna show it to my local tournament organizers and hopefully I'll see it in the TempleCon Tournament.

Anyway to the point of the article, how to fix killpoints....

Now killpoints is my least favorite Game type in 40k but I do not dislike it. I think its a good idea and simple for a new gamer or just a for fun game, which this edition was designed for. The problem that people see in this game type is that a 10 man squad of TH/SS terminators is worth the same as a 5 man unit of scouts.

Ok now I get why this annoys the addicts of Victory Points....but I have a solution that will atleast cut the edge off killpoints like a nicotine patch! (or gum if you prefer)

Get it? So basicly that big unit of terminators is worth so much more than those scouts now. IT also means that most armies will be worth the same ammount of killpoints. If your playing 2000 points then most likely your army has 20 killpoints as well as your opponents.

Ok here is my other idea basicly stolen from Battle missions. Each of your opponents units is worth different killpoints. Modified to

This of course makes your non-troops worth a lot in this set up. A good balance to the troop focused objectives missions. This is my favorite set-up for killpoints. (Also Bjorn is worth a 7 killpoint swing hahahaha)

More on this in the future..... Two Video BatReps coming tommorrow night!