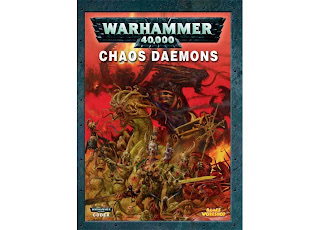 Ok so if you have not grabbed the latest white dwarf, or are under a rock, GW had a shock release of a chaos daemons mini codex update. Also it was not a typical update as it was an actual separate magazine itself with even color and army pictures and a cover.....not bad GW not bad at all. If this is what we can expect periodically I guess I will have to subscribe to white dwarf. Now it was not an entire update for the book but it did change a few units quite a bit. Some stuff got a lot cheaper while new units were introduced. Now I do not play daemons myself but I do frequently oppose them as a consistent opponent in Rhode Island (and he knows who he is) plays them as his main army (for the most part). So I can talk about them as I do end up playing them in tournaments as well as in fun games. I also have frequently considered taking them as allies.

So I will start at the start of the army list

Flamers of Tzeentch
Ok so not much changed for Flamers EXCEPT they got a whole hell of a lot cheaper and better. They dropped from 35 points a model to 23.....that is a huge drop for one of the best anti-horde units/anti-terminator units in the game. They are jump infantry with a stat line of WS 2 BS 4 S4 T4 2 wounds (awesome!), 2 attacks at I4, and a 5++ save They can use two different shooting attacks. One is a 4+ to wound no armor or cover saves allowed shot and another is a typical shooting attack but who cares. These guys can merc terminators easy. For 69 points they make an excellent suicide deep strike squad to drop three 4+ to wound no save templates on the likes of hordes and terminators. For 143 points you get a unit of 6 with a pyrocaster champion. Being jump infantry hiding these guys inside of a castle and jumping them out to flame incoming assault units, after a conservative deep strike nearby. You use to get the same unit for over 210 points. An excellent choice and a great ally to add in with other daemon allies. Although I will state they can no longer take a bolt of tzeentch...

Screamers of Tzeentch
Now to the old "flying melta bombs" for the daemons codex....and no longer the flying melta bombs....these guys got a hit at being increased from 48 points to 75 points for three models. Instead of being a melta bomb instead they have S5 Ap2 armourbane close combat attack except they make as many attacks as they can which is four on the charge...so they are not bad at killing vehicles and will still probably kill a land raider. They cannot take unholy might but they can make d3 S4 ap- pass over attacks if they go over a unit per model which is nice and starting to manifest more and more in codices. Since they are still jetbikes as well. They also now have 2 wounds per model which is nice.  They do have jink since they are jetbikes which is good. They did get a boost but are more expensive....

Hellflayers of Slaanesh
So a new daemon chariot with two hullpoints and AV11/11/10, It has D6 S4 AP- hammer of wrath attacks with rending which is also nice and gets that many extra attacks for every unsaved hammer of wrath wound. Overall not a very good choice in the codex as it is flimsy but with 4 attacks base on the rider w/ rending claws is can hit hard if it gets a good amount of hammer of wrath wounds at I6. 60 points is not that bad but it does compete with other better FA choices like screamers.

Anyway overall a nice boost to daemons. Flamers and seekers got a lot better and I expect to see Flamers a hell of a lot more.....multiple 6x units seem almost mandatory in every army from my point of view with the third slot being fiends.....but that is what I would play....especially since points will still not be spent on the nerfed blood crushers.....more on this later.

Please comment with your opinion of the daemons update and subscribe to the blog, thanks for reading :)
Posted by Kevinmcd28 at 12:24 PM